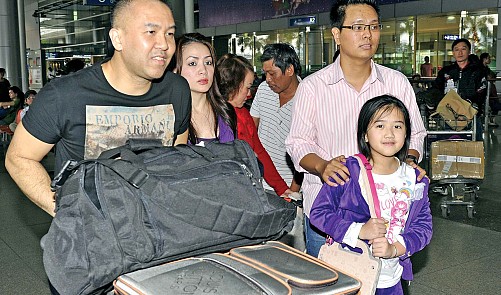 HANOI – Her parents named her Dung – but please take care with the pronunciation. Her roots are Saigonese, so that would be yung, not zung – and certainly not the way English speakers want to say it.

Little Dung, born a few years after the reunification of Vietnam, was still a baby when her parents loaded the family into a crowded boat to search for a new life. After a year, the family made it to the United States. As she grew up, Dung realized that a name common in Vietnam could be awkward among Americans. Her parents did too, and named their youngest daughter Jennifer.

Decades would pass before Dung would officially change her name to Yung.

“So,” I separately asked Yung and Jenny during their recent visits to their ancestral homeland, “does coming here make you feel more Vietnamese or less Vietnamese?” The sisters had similar split-second reactions to my question:  Eyes widened, heads tilted back. “Less,” they said, with small grins.

A fair question, yes? There’s the old saying that contrasts rural and urban life: “You can take the girl out of the country, but you can’t take the country out of the girl.” Sometimes together, sometimes separately – and sometimes with their parents – the sisters experienced a Vietnam far different from the “Little Saigon” of Orange County, California. Their travels took them from Sapa to the Mekong Delta, as well as Hanoi, Da Nang, Hoi An, Nha Trang and that big city where Yung was born. Certainly in the U.S. both Yung and Jenny consider themselves to be both Vietnamese and Americans. The Vietnamese they learned from the parents and in weekend classes may be limited and rusty, but it’s not as though they’ve totally lost the mother tongue.

Vietnam, it seems, proved to be more of a culture shock than they expected. There was no indication that the land of their ancestors somehow tugged at some deep, unresolved sentimental yearning in their souls.

Taking these women out of America did not take the American out of these women.

The street-scene photos that Yung posted on Facebook would charm tourists and young Viet Kieus. But here in Vietnam, nobody thinks twice about a motorbike laden with coconuts for delivery to a café. Not that anybody should find this surprising.

Still, the sisters seemed to have a good time – even if Yung did catch a 24-hour intestinal bug, perhaps from some street food. She and Jenny agreed that the highlights were visiting family – to spend time with immediate family now living here as expats, and to meet, for the first time, their extended family in Ho Chi Minh City and an uncle in a village on the edge of the Mekong Delta. Jenny talked to a cousin who worked as a bank teller – a job that Jenny once had. They were also pleased with how their Vietnamese improved with just a couple of weeks of exposure. Both struggled comprehending the northern accent. Early on, Yung spoke of how she could understand comments from native speakers, but struggled to muster a response. Those problems faded in a matter of days. Curiously, the U.S-born sister’s Vietnamese is the better of the two. They had a theory about that: When Yung was a toddler, her parents were working hard trying to learn English, a language first mastered by an older sister and brother. After Jenny was born, they had reverted more to Vietnamese at home, in part because their ba ngoai (maternal grandmother) had immigrated to join them. Besides, Jenny had to brush up on her Vietnamese to serve Vietnamese customers at the bank.

The lowlight, they agreed, was Nha Trang. It struck them as a tourist trap – and one that offended their Vietnamese (American) sensibilities.  “It was too Russian,” Yung muttered. At a restaurant the family ordered lau, a kind of seafood hotpot. The serving was so meager and so unflavorful that their father complained. A waitress apologized, saying they had to cater to Russian tastes. And a taxi driver, they said, tried to rip them off.

Before leaving, they were able to catch a glimpse of Tet (Vietnam’s Lunar New Year) preparations that they would never see in Little Saigon, such as the sudden appearance of roadside markets selling flowering peach trees, and kumquat trees being delivered by motorbike.

But then, Tet is about homecoming – and their home, really, is across the Pacific.