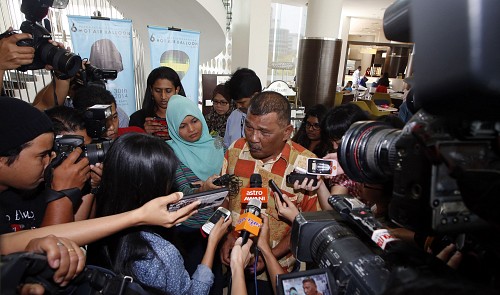 Is Malaysia hiding any truth about missing MH370?

All eyes are on Malaysia and its missing Malaysia Airlines flight MH370 but the country’s authorities and its national flag carrier have only angered the world by repeatedly releasing conflicting information over the fate of the doomed jetliner.

“It feels like a bomb has exploded amid Southeast Asia,” a Malaysian journalist, who prefers to remain anonymous, told a Tuoi Tre reporter at a press conference in Sepang on Tuesday after the Malaysian military announced it believed the Boeing 777 changed course after Kota Bharu and made it into the Strait of Malacca.

The Vietnamese reporter, Trung Nghia, said the meeting room was filled with anger when the announcement was made four days after the jetliner went missing, while a large-scale air and sea search mission now remains desperate in Vietnamese waters.

But fewer than 24 hours later, a Malaysian military chief explicitly denied that ‘belief’.

"I wish to state that I did not make any such statements," Air Force chief Rodzali Daud said on Wednesday, referring to the article in Malaysia's Berita Harian newspaper, which yesterday quoted him as saying the plane was last detected by military radar at the Strait of Malacca at 2.40 a.m. on Saturday, hundreds of kilometers off course.

The air force chief said he had merely repeated that military radar tracking suggested the plane might have turned back.

Earlier Kuala Lumpur said that MH370 was last tracked in the waters between Malaysia and Vietnam, miles off the former’s east coast while Malacca is off the west coast.

It was those conflicting accounts on the last known position of the Malaysia Airlines flight MH370 before it vanished that have sent Malaysia under fire.

Netizens have voiced their doubt that Malaysia is seemingly hiding some truths about the incident that has left the relatives of 239 people on board hopeless for nearly five days.

“Malaysia, how could you hide something this big until now?” the New York Times quoted a Chinese social media user as posting on Twitter-like Sina Weibo.

This is not the first time Malaysian authorities have issued contradicting statements about the flight MH370.

Their inconsistency had started with inspector-general of police Tan Sri Khalid Abu Bakar contradicting an earlier statement by director-general of civil aviation Datuk Azharuddin Abdul Rahman that five passengers who had checked in for the flight MH370 did not board the aircraft, according to The Malaysian Insider newspaper.

Khalid told a press conference on Tuesday that there were “no passengers who checked in for the flight but failed to board," and thus, no baggage was removed from the aircraft, the newspaper reported.

But in a clarification issued later the same day, Malaysia Airlines confirmed four passengers had booked tickets on the flight but failed to check in at the airport or check any bags for the flight, it said.

Hundreds of international reporters are in Malaysia to cover what is now labeled as “unprecedented aviation mystery,” but few are satisfied with how its authorities deal with the situation, Trung Nghia, the Tuoi Tre correspondent, reported from Sepang.

During a press conference on Monday, Malaysian Transport Minister Datuk Hussein asserted to hundreds of local and international reporters that “We have nothing to hide.”

Just a day later came the Malacca Strait ‘revelation’, something Malaysia might have been ‘hiding’ for four days since the mysterious disappearance of the flight MH370 last weekend, though it is now deemed unverified.

Malaysian civil aviation chief Datuk Azharuddin Abdul Rahman also recommended that international reporters “not speculate too much” about the incident.

Vietnam and many other countries have been actively combing its waters for any sign of the missing plane for days, while Malaysian officials had said nothing about the possibility that it might have changed course to the Strait of Malacca off Malaysia’s west coast.

There were also media meetings that were abruptly canceled without any explanation, like the one on Tuesday morning, according to the Tuoi Tre reporter in Sepang.

Malaysia Airlines has promised to make the case transparent but that supposed transparency is being challenged, and the mystery surrounding the fate of the flight MH370 is getting deepened day by day.