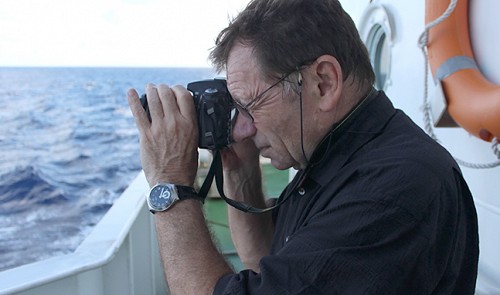 According to the Vietnamese Embassy in China, 13 Vietnamese fishermen were released on Tuesday after they had been illegally detained by Chinese vessels over the past three weeks.

André Menras also talks about his new movie, which focuses on Vietnamese law enforcement and fishermen in the East Vietnam Sea.

Here is the interview translated into English by Tuoi Tre News:

I arrived here to make a documentary about how Vietnamese fishermen catch fish in the waters off Hoang Sa (Paracel) archipelago. My film will begin with the scene of the Haiyang Shiyou 981 oil rig and Chinese military ships in Vietnamese waters.

The next scene will depict the return trip of a fishing boat owned by Mrs. Nhu Hoa [a Vietnamese woman in central Da Nang City] which was sunk by attacks from Chinese vessels. I will interview several fishermen aboard that ill-fated ship to show the world that the area around the oil rig was very dangerous due to threats from China and tropical storms.

Nevertheless, Vietnamese fishermen still continue their offshore trips. Mrs. Nhu Hoa now owns a ship with a 1,200 horsepower engine. This sends a message to China that despite threats these fishermen will never give up.

For my part, I would like to send my own message to people in Europe and America through my documentary that sovereignty speaks to both politics and humanity. I want to make a film about humans. I want to record the images of Vietnamese Coast Guard soldiers who have been very calm and determined to defend their national sovereignty. I also want to interview foreign journalists aboard Vietnam Coast Guard ships to ask for their views on what they have seen and felt.

As a Vietnamese citizen, I think that Vietnam will lose its seawaters if the country does not peacefully denounce [China’s acts] in accordance with international law and tell the world what is really happening at sea. In my opinion, China will not start a war because they will lose their international reputation if they do so. Additionally, if a war occurs, China’s relations with other nations will worsen.

As far as I have known, some fishermen in Da Nang including Mrs. Nhu Hoa are ready to bring China to court. Several Viet Kieu (overseas Vietnamese) in the United States and lawyers in Vietnam will help them prepare documents to pursue this possible lawsuit.

Murayama told Tuoi Tre that he collected the signatures for two reasons.

“First, it’s a souvenir of my trip and a reminder of what is happening in these waters. Secondly, I want to publish the photo of the life-jacket in my newspaper to show people that the conflict is now attracting the attention of many international and local reporters,” he said.