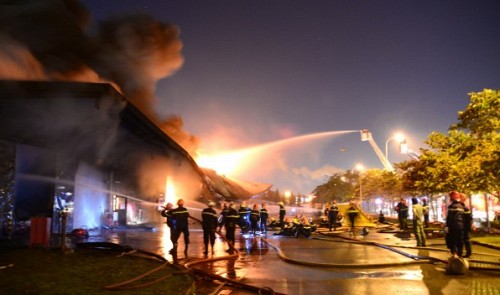 A prolonged, chemical-fueled fire broke out at a Japanese print ink company in the southern province of Binh Duong on Thursday afternoon. The blaze lasted until early this morning and caused major property damage. There are no immediate reports of casualties from the eight-hour fire, which began at 4 pm Thursday and was not extinguished until 1:30 am this morning, local authorities said. Witnesses said the fire broke out at a warehouse run by Sakata Inx Vietnam Co., Ltd., a 100% Japanese-owned enterprise, located in the Vietnam-Singapore Industrial Park (VSIP) in Thuan An town. Hundreds of workers and several Japanese experts were working at the warehouse when the fire began, but they all managed to escape safely, witnesses said. There were 300-400 workers at the plant at the time of the fire, said Tran Van Nam, standing deputy chairman of the provincial People’s Committee. Flames spread rapidly thanks to large amount chemicals stored in the area, which caused many loud explosions as they burned. Hundreds of firefighters, along with more than 20 fire engines, were sent to the scene, but they struggled to contain the blaze thanks to the presence of the chemicals. Six fire engines from Ho Chi Minh City, which borders Binh Duong, were sent to the plant to help put the fire under control. Firefighters tried to prevent the fire from expanding to minimize damage and protect neighboring areas. Arriving at the scene to direct the firefighters, Tran Thanh Liem, deputy chairman of the Binh Duong province People’s Committee, told Tuoi Tre (Youth) correspondents that the conflagration was hard to extinguish because of the chemicals stored in the plant. Robert Ng, who represents the company’s management, told provincial leaders that several tanks of solvents used for printing ink production burst into flames and exploded after sitting in direct sunlight for too long. The fire resulted in serious losses for Sakata Inx Vietnam Co., Ltd., as roughly 60,000 tons of chemicals, along with a large volume of other material and equipment, were consumed in the blaze. Local police and the VSIP management board are investigating the cause of the fire. According to the VSIP management board, Sakata Inx Vietnam Co., Ltd., a 100% subsidiary of Sakata Inx Corporation, Japan, has total investment capital of US$14.5 million.