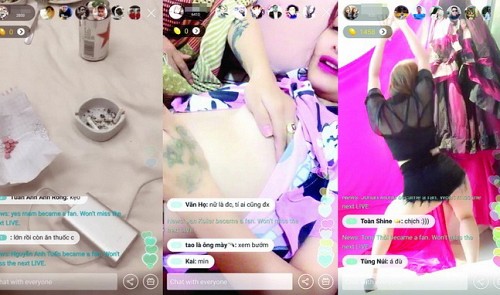 A new social network featuring live video streaming has become a new platform for Vietnamese youths to showcase their lifestyles, including non-traditional ones, as the world watches on.

At one o’clock in the morning recently, over 6,500 users were on Bigo Live, a live video streaming social network that allows its users to broadcast their activities live via smartphones to their audience of choice, and were still wide awake watching a group of three youths club-dancing for their camera phone.

Out of the blue, a girl in the group nicknamed Trang said, “I’ll flash when the view count reaches 7,000. Hurry up, guys!"

Three minutes later, the girl smiled suggestively and pulled up her shirt to reveal her breasts in front of 7,234 live viewers.

This is only one example of hundreds of sexually explicit live streams broadcast daily on Bigo Live, which has attracted over one million users, most aged 18 to 25, since its launch in Vietnam on May 18, boasting 700,000 active daily users.

Logging into a chat room on Bigo Live, developed by a Singaporean company, at 20 after midnight last Monday, one Tuoi Tre (Youth) newspaper reporter found himself watching a live broadcast of a group getting wasted inside a secluded room.

The camera holder, who identified himself as V. from Ho Chi Minh City, said the group was “eating candies” (a Vietnamese slang term for synthetic drugs).

Over 3,000 viewers watched on as the group proceeded to take the drugs, while comments popped up furiously onto the screen, many encouraging the group and asking questions like; “are those colored candies?” or “these guys are for real,” and “shoot it up, guys.”

After a few minutes, V. turned the camera at his face and wrapped up on about a dozen pink pills on a white piece of paper.

V. then proceeded to distribute the drugs to everyone in the room, before the lights went out and club music could be heard in the background.

By the time V. ended his live stream, the application’s view counter had calculated that as many as 15,502 viewers were watching the group get high in real-time.

At 12:30 am in another chat room, a young man with username N.O. was live-streaming himself touching the private parts of a girl lying by his side, all the while asking where his viewers would like to see him touch the girl next.

Despite ending after ten minutes and 49 seconds, the sexually explicit live broadcast had already attracted as many as 17,414 live viewers.

In another chat room, two female undergraduates dressed in suggestive clothes could be seen dancing erotically in front of the camera while sharing their Facebook addresses to the 23,332 viewers at two in the morning.

Apart from drug use and sexually explicit content, the social network also sees its young users sharing their everyday activities to an audience of hundreds or thousands.

Over 15,000 users watched a girl live-stream herself getting a tattoo on her breast for over an hour at a tattoo shop in Phu Nhuan District, Ho Chi Minh City last Monday.

L., a live streamer from Ho Chi Minh City, dozed off during one of her live broadcasts, but 627 persistent viewers still hung around to watch the girl sleep!

White-collar workers and deliverymen also joined in the trend, broadcasting their whole day of work live on the social network for the whole community to see, some even going as far as live-streaming themselves and their family members brushing teeth, cooking, or changing clothes.

Q., one of the two aforementioned female undergraduates, said she deeply regretted the live streams after discovering her explicit clips available on YouTube.

“I was just having fun with the new app and was only hoping to bring the fun to my viewers, too,” Q. said. “I didn’t know they would record everything and upload it on the Internet. I’m deeply worried.”

Ngoc Lam, a 21-year-old man from Ho Chi Minh City, said he had to uninstall the app after having used it for a week, saying it was “addictive.”

“Nighttime is when youths unleash their ugly self, and since nobody knows anybody on the social network, inappropriate content keeps flooding in, and yet for some it’s a pleasurable hobby,” Lam said.

Ethan Van, marketing executive of Bigo Live in Vietnam, said that his company had not been registered for business in the country despite having opened a representative office in District 1, Ho Chi Minh City, on May 18.

However, according to Tuoi Tre’s findings, the company has already recruited and signed contracts with hundreds of female Vietnamese students to work as ‘baits’ by using the social network at least 40 hours every month with a minimum wage of VND3.2 million (US$143).

Commenting on the application’s negative impacts, Van said his company took full responsibility for the issue, adding that he was personally saddened by that.

According to an, his company has taken measures to restrict accounts that violate the application’s terms and conditions.

More specifically, he said, the company had established two teams of supervisors to monitor the two markets in Vietnam and Singapore, who had already blocked over 700 accounts that go against the Vietnamese sense of decency.

Van added his teams are on the watch 24 hours a day, and would deliver warnings to first-time violators, before blocking them completely for further abuse.

The marketing executive added that Bigo Live currently had seven million users worldwide, and that the company is looking to cooperate with a university in Ho Chi Minh City to deploy an e-learning application in the near future.