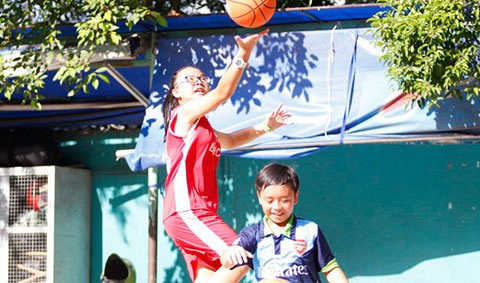 Being busy never an excuse for not keeping fit: expats

Editor's note: Expat Dutchman Joost van Vliet, who calls himself a keen triathlete, has shared his opinion with Tuoi Tre News: being busy is never an excuse for not doing exercise.

Although my job has nothing to do with sport, I am a keen triathlete, albeit a slow one. I love riding my bike and I like to run as well.

I have made a lot of new Vietnamese friends in the Vietnamese triathlon and Mountain Biking communities, mainly through rides organized by The Bike Shop (Thao Dien) and the Vietnam Triathlon Club.

I also see that whenever I’m out for early morning bike rides, there are large numbers of Vietnamese exercising in the parks (Thu Thiem park for instance). These are mainly “older” people though, the younger ones are riding their bikes or running.

I do know a lot of young people who are active in sports like triathlon or long distance running, but if I look at my workplace I would think that the majority of my colleagues aren’t that interested in sport (apart from some very fanatical soccer players!).

In my view, being too busy is never an excuse. I work at least 50 hours every week, and still manage to train up to 6 or 7 hours a week. Time management is important. I go to bed at a reasonable time so I can get up at 4:45 am to get on my bike by 5:00 am at least once or twice a week. That means I can get 1.5 hours in and still be home by 6:30 am, in time to help make breakfast for my children.

I also know people who manage to go for a lunchtime run, even if you “only” run 30 minutes, it’s better than nothing! Being part of a group can also be motivating, because you will have the added “peer pressure” to show up.

I must admit though that the climate and traffic are not very conducive to exercising outdoors, unless you go very early, which may be a deterrent for a lot of people. Perhaps the city council could organise “motorized traffic-free zones” in the morning between 5:00 am and 7:00 am, where you are only allowed to run or use bicycles. Less pollution and less risk of accidents could help?

Finally, the fact that there are more and more races popping up in Vietnam, from road running races and triathlons to trail running and mountain bike races, to all kinds of Fun Runs, proves that there is a definite interest in these events. What I believe is that with the growth of events like the “Color Me Run” and “Champion Dash,” etc., more and more people who may not be interested in formal running events like marathons are stimulated to become active.

I believe that sports are extremely important to one’s mental and physical health. When I was younger, I participated in judo, which helped me build my confidence. During my university years I was part of a rowing crew, which also taught me to work as a team.

When I started work, I became lazy and fat. However, when we had children I decided that I wanted to set a good example to them and that’s when I started riding and running. This eventually led to my “addiction” to triathlon, culminating in finishing 3 Ironman triathlons (3.8km swim, followed by a 180km bike ride, and finially a 42.2km run).

In my country, we used to learn to swim when we were very young, at school. After that, we still used to do all kinds of sports, such as athletics, soccer and hockey. I may have not been good at any of them, but it did make me understand that exercise is important.

Exercise and sport are so important. I feel terrible if I don’t do something active each day, go for a run, go to the gym, whatever. In Australia I was at the beach every day, surfing, kite surfing or just going for a swim. I can't do that in Saigon so I've found some local options, I play Australian football.

In my opinion sport still isn’t a central part of Vietnamese youth's lives, and I guess that's because in a developing country the most important thing is to get a good job.

Australia has a different approach where sport is almost as important as school, sometimes more important. Almost everyone has a sport they really love and play regularly.

Having said that, I do see that Vietnamese people stay active throughout their lives. In Australia we have a tendency to play sport while we are able to be 'good' at it, and then a lot just stop. Here I see that middle-aged and older Vietnamese people still get out and exercise very regularly, and that's great.

In Australia we had to play every sport at school, just so we knew them all and if one was for us we could get into it more seriously. That would be good in education here, or maybe it happens already and I don’t know about it?

Recently I launched my website sportinsaigon.com, which focuses on watching and playing sport in Saigon. I noticed a huge community of sports lovers and thought there could be a site to bring them all together, and not just focusing on watching, but also getting out there and trying. My plan is to also offer the site in Vietnamese to help increase the audience and also make it more relevant to everyone.