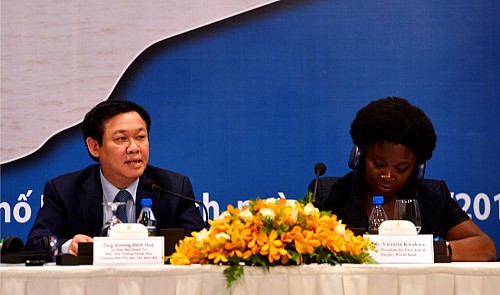 Climate change is expected to challenge the lives and productivity of the 10-million people living in Vietnam’s Mekong Delta, delegates have said at a conference.

The 2016 Mekong Delta Forum, aimed at finding new measures to cope with climate change in the region, was organized in Ho Chi Minh City on Monday, attended by Prime Minister Nguyen Xuan Phuc and World Bank Vice President for East Asia and the Pacific Victoria Kwakwa.

Speaking at the event, PM Phuc highlighted the importance of the Mekong Delta to Vietnam’s strategy of socio-economic development.

The region is considered the nation’s biggest hub for agricultural and aquacultural production, contributing nearly 41 percent of Vietnam’s agricultural output, 70 percent of the country’s fish exports, and 90 percent of its rice shipments.

However, the Mekong Delta is facing many challenges and difficulties brought about by climate change, namely severe drought and salt water intrusion.

According to Cao Duc Phat, Minister of Agriculture and Rural Development, this year droughts have damaged 208,000 hectares of paddy fields and 9.4 hectares of fruit trees in the region, resulting in a drastic drop in production.

Thousands of households across the localities were also deprived of clean water resources, Phat added.

Coordination between provinces and ministries has been urged and many measures applied to cope with the consequences, including adjusting farming models, building anti-drought constructions, and others.

Several leaders in the region suggested that it was necessary to raise local farmers’ awareness of the climatic condition and to provide support in terms of equipment, technology, and resources.

According to Tom Kompier, a Dutch expert, competent authorities should consult experts and scientists to create an effective farming model in the region.

Meanwhile, Leo Sebastian, a crop researcher, said that Vietnam should exert more effort to develop new types of paddy which can adapt to the new climatic condition.

Weather forecast activities should also be improved in order to be more pro-active in planning crop seasons, Sebastian added.

Aside from the influence of climate change, Vietnam has been facing a water and alluvium shortage due to the lack of the water flowing from the Mekong River upstream, Deputy Prime Minister Vuong Dinh Hue said at the meeting.

This is a global problem, Hue stated, adding that it should be addressed at international forums.

The deputy premier expressed his hope that the World Bank and other international organizations would further provide financial and technical assistance to deal with the problem in Vietnam.