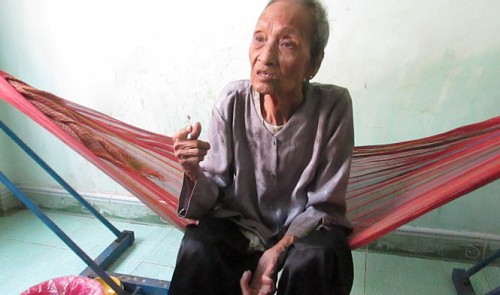 A Vietnamese, named last year the world’s oldest living woman, has died peacefully in her home at the age of 123.

Tru was born on May 4, 1893 to a family with long-standing farming tradition in Da Phuoc Commune in Binh Chanh, an outlying Ho Chi Minh City district.

Family members were proud to share that Tru was healthy and worked as hard as a man when she was young.

She took part in many activities to support Vietnamese soldiers during wartime, including tunneling and cooking to supply food to the troops.

Tru was mother to eleven children, including three sons and eight daughters, only two of whom were alive and in their eighties at the time Tru received the recognition, according to the Vietnam Book of Records (Vietkings).

She lived with her youngest daughter-in-law, 77-year-old Nguyen Thi Ba, in Hamlet 5 in Binh Chanh District.

Tru led a long, healthy life and had never been hospitalized for any serious illness, Ba said, adding that her mother-in-law’s routine meal included rice porridge with pork, milk, and a soft dessert.

The secret of longevity of the world’s oldest woman was likely to be her kind-heartedness, benevolence, and willingness not to envy others, according to Ba.

A number of Tru’s relatives, acquaintances and representatives from local authorities attended her funeral.

Her body will be moved to the Sai Gon Thien Phuc cemetery, where she will be buried.