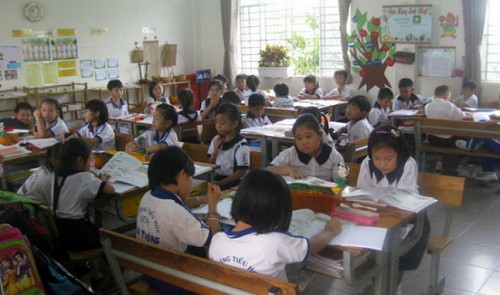 Hundreds of parents on Sunday morning came to an elementary school in central Vietnam to voice their objection to the implementation of a new teaching model which they deemed counter-productive.

The Viet Nam Escuela Nueva (VNEN) Project, which leans toward a more student-centered educational environment, has been piloted in a number of schools in Vietnam since 2012 under a US$84.6 million grant from the United Nations Global Partnership for Education.

The model was first adopted in Colombia in the late 1990s to cope with mixed classes in rural areas where students were not on the same level.

As of 2016, 2,365 elementary schools and over 1,000 middle schools across Vietnam have tested the new model in a number of their classes.

VNEN has received mixed comments from parents and teachers, however, with some deeming the model impractical and counter-productive in the Vietnamese context.

The most recent opposition broke out on Sunday, when hundreds of parents whose kids go to Nguyen Trai Elementary School in Vinh City, Nghe An Province, gathered in the schoolyard to demand an answer as to whether the model would be implemented in the upcoming academic year starting September.

Most of the parents present were concerned for the negative health effects of the new class sort, which divides students into groups facing each other instead of the traditional column seating where all students front their teacher.

“My child’s performance at school has become worse each day because he’s shy by nature,” said H., mother of a third grader at Nguyen Trai Elementary School, who added that the new model is only beneficial to dynamic and capable students.

“Furthermore, VNEN places emphasis on self-reliance while elementary students are too young to develop such character,” H. claimed.

Other parents complained that the teaching model only provides students with basic knowledge, while expressing concerns for their children’s performance in middle school, where they will be in the same class as those who have studied with the traditional model.

According to Tran Thi Nga, principal of Nguyen Trai Elementary School, the upcoming school year will be the fifth year her school has implemented the VNEN model.

“There have been parents who wanted to transfer their children to other schools, claiming that the VNEN program did not suit their children,” Nga said.

Thai Khac Tan, head of the Vinh Bureau of Education and Training, attributed the shortcomings of the model to a lack of facilities and overcrowded classes.

According to Thai Huy Vinh, deputy director of Nghe An Province’s Department of Education and Training who showed up later the same morning to talk to the angry parents, the department has requested a poll for parents to have a say in whether to keep the new model or go back to the traditional one.

Government funding for the VNEN program ended on May 31, and the minister of education and training has said future implementation of the model would not be compulsory.