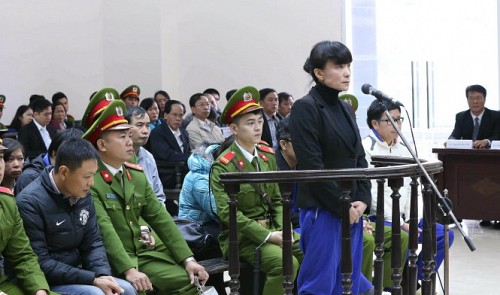 A Hanoi appeal court on Tuesday upheld the verdict of a former banker, who was sentenced in October 2015 to 30 years imprisonment for her main role in a corruption scandal that caused multimillion-dollar losses to a state-owned bank.

Pham Thi Bich Luong, former director of the South Hanoi branch of Agriculture and Rural Development Bank of Vietnam (Agribank), lost her appeal against the jail sentence for “breaching regulations on loan provision” and “abusing power while performing official duties”.

The Hanoi court yesterday decided to uphold the ruling after ten days working on the appeal.

In October 2015 Luong was indicted, alongside 17 others, for involving in a foreigner-related economic case that led to losses in loans of over US$122.6 million to Agribank in the 2008-12 period.

The ex-bankers had been cheated into offering loans to five foreigners from Lifepro Vietnam Joint Venture Company who sketched a fake project to borrow money from the bank.

Two of the foreigners are Chinese national Yang Hong, chairman of the company’s management board, and Boubker El Fehdi, of Canadian nationality, the firm’s general director.

The other three are the shareholders of the company, including two Canadians Driss Bou Chama and Ahmed El Fehdi, and Italian man Manuela Polga.

Between 2008 and 2012, Luong proposed that the management board of Agribank offer loans to Enzo Viet JSC, the predecessor of Lifepro Vietnam, without verifying its lending files and conforming to lending regulations.

The wrongdoings by Luong and other banking officials caused a total loss of VND2,755 billion ($122.6 million) worth of loans given to the company.

The appeal court also upheld a similar sentence to Chu Thi Kim Hien, Luong’s deputy at the South Hanoi branch, while rejecting the appeal by Pham Thanh Tan, former general director of Agribank, and sentenced him to 22 years in prison.

Out of the 17 defendants who filed for appeal, only nine had their sentences reduced or replaced with probation.

The foreigners involved in the scam were also made to pay a compensation of VND2.5 trillion ($111.61 million) to Agribank apart from their sentence.

Vietnam and the U.S. also voiced their concerns over North Korea’s nuclear weapons and ballistic missile programs and tests in their joint statement