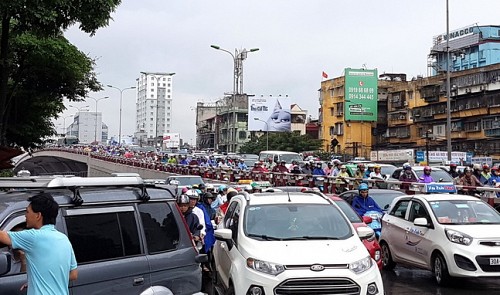 Hanoi's Department of Transport is considering a ban on non-resident motorbikes entering the inner city from 2021, among several other measures to tighten management over personal vehicles in the capital.

The department is welcoming professional feedback on the first draft of its recently announced plan that looks to restrict the number of personal vehicles in the capital.

The plan, drafted by the department under the direction of the city’s administration, introduced a three-step restriction on motorbikes in the capital by the year 2025.

In the first phase beginning 2020, motorbikes will have restricted access to the Old Quarter area during the weekend and on national holidays.

From 2021, all motorbikes not registered in Hanoi will not be allowed to enter the capital’s inner city area, which is enclosed by Ring Road 1, from 7:00 am to 7:00 pm every day. The motorbike restriction in the Old Quarter area will also be expanded to all weekdays.

In the second phase that begins in 2023, the restriction on non-local motorbikes will be expanded to include the areas enclosed by Ring Road 2, while other old streets such as Tran Hung Dao and Ly Thuong Kiet will also be restricted for motorbikes.

From 2025, the third phase will include an additional ban on motorbikes in some areas inside Ring Road 3.

Hanoi has already laid out a plan to improve its public transport by 2020 as an alternative to personal vehicles.

According to the plan, over 500 new buses will be put into operation every year, while three Bus Rapid Transit (BRT) and five urban railway routes are expected to be finished by 2020.

Transit and parking areas will be built near public transport stations to improve accessibility and encourage their use.

According to Hanoi’s transportation planning approved by the country’s prime minister, public transport in the city must be able to handle 20 percent of its citizens’ commuting demand by 2020, and up to 40 percent by 2025.

According to estimations by the transport department, with the annual sales increases of 7.6 percent for motorbikes and 12.9 percent for cars, by 2020, Vietnam’s capital will have had to handle at least 938,000 cars and over 6.2 million motorbikes, exceeding the current capacity of its roads by five times.

The transport department has estimated that this number will have risen again to 1.3 million cars by 2025 and 7.3 million motorbikes are expected to be registered in the city.