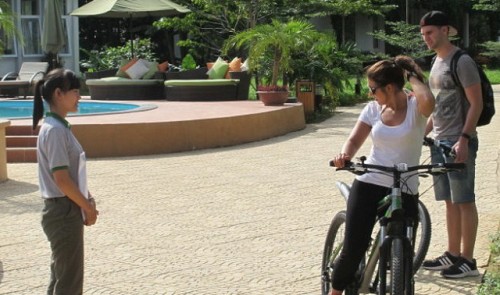 The community tourism model, inteneded to help poverty-hit areas in Vietnam, has been among many projects backed by the Asian Development Bank in recent years, and successful examples can now be observed in many regions in the north-central province of Quang Binh.

Thanks to those projects, local residents who previously earned a living by working in paddy fields or collecting logs for sale, sometimes through deforestation, now understand how to conduct tourism-related business in a professional manner.

The grounding for success, as observed in Chay Lap, a village in Phuc Trach Commune, Bo Trach District, is the smooth cooperation between the government, residents and a professional tourism company, with financial assistance from the ADB.

Before devising the pathway to success, people and authorities in Chay Lap experienced failure despite their aspirations of embarking on tourism activities in order to create a better life.

Nearly a decade ago, 75 percent of the 242 homes to 1,016 residents in Chay Lap, surrounded by mountains and rivers, were considered underprivileged. Local villagers mostly worked in paddy fields, and after harvest time, went into the woods to collect logs for sale.

When authorities started to ban deforestation, Chay Lap villagers were left unsure of what to do next to make ends meet.

Then came the idea of stepping into the field of tourism. In 2008, the Chay Lap Community Tourism Cooperative was formed, thanks to funding from the ADB’s official development assistance, with Vo Xuan Thai, an esteemed local man, voted its chairman.

Local residents then started taking up short-term training courses on tourism, hospitality, cooking and English for tourism purposes and to prepare for a life-changing time.

However initially, things did not turn out as easy as villagers thought.

Over the course of five years, few tourists came to the village to admire the natural landscapes, including rivers and mountains, and enjoy the countryside lifestyle. Villagers would warmly welcome those few visitors, but when there were none, they returned to their farming work.

Thai, the cooperative’s chairman, admitted that they lacked the management ability to promote their business, and did not have the language ability to communicate with foreign visitors.

The project opened a tender for travel firms to join in developing the Chay Lap community tourism project, under the condition that the company invest in the existing facilities and resources at the village, as well as using 75 to 80 percent of the local workforce.

Oxalis, known for offering adventure excursions to the famed Son Doong Cave and neighboring grottos in Quang Binh, won the bid in 2014.

With the participation of a professional tourism player, the Chay Lap farmstay area was formed, eventually changing the lives of local villagers.

The Chay Lap farmstay currently has 27 rooms with 62 staff, who are professionally trained by foreign experts recommended by Oxalis.

With its reputability and experience, Oxalis has also run online ads for the farmstay area, bringing professionalism to the once-poor village.

Oxalis also kept its word on using local labor: 25 out of the 62 staff members are Chay Lap villagers, and the others are from nearby villages or other areas in Quang Binh.

The Oxalis director, Quang Binh-born Nguyen Chau A, admitted that there were myriad difficulties in the early stage of the project, but he is determined to do even more for his home province.

Le The Luc, director of the management board of Quang Binh’s Greater Mekong Subregion Sustainable Tourism Development Project, remarked that the cooperation between a professional travel firm and the local community has been “beyond [his] dreams.”

He credited the success to the openness of local authorities in allowing a capable private firm to utilize public assets.

Chay Lap villagers can now dream of a much brighter future for themselves and the younger generations, thanks to the farmstay tourism model.

“No villager has to go to the forest to collect logs any longer,” Thai, the head of the Chay Lap cooperative, said.

“The poverty rate in the village has also dropped to below 35 percent.”

Le Thi Hue, a cook at the Chay Lap farmstay, is one vivid example of how the community tourism project has changed local villagers’ lives.

Hue used to work all day in the field before she was recruited to the Chay Lap farmstay, where she was trained to be a chef’s assistant.

She has signed a contract with the company for a monthly wage of VND3.5 million ($156), and has her husband as a colleague. The husband is in charge of maintenance at the farmstay area with a salary of VND5 million ($223) a month.

It is not difficult for Hue to see how her life has changed.

While the four-member family would earn VND30 million ($1,339) after a year working tirelessly in the paddy field, the husband and wife now collectively make VND8.5 million ($379) per month.

After escaping poverty, Chay Lap villagers are now able to invest in education for the next generation.

While most children in the village would quit school at grade three or four, there are now 47 secondary students and 13 high school students in Chay Lap.

The community tourism project has brought changes not only in the income of local villagers, but also in their way of life and behavior.

“There are obvious improvements in the way people here speak and behave, beautifying themselves in the eyes of tourists,” Thai remarked.