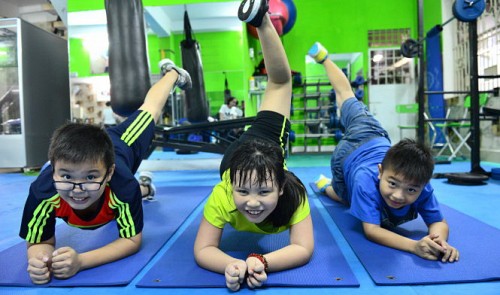 In recent years health-conscious parents in Ho Chi Minh City have sent their children to classes in order to avoid the risks of obesity and have fun at the same time.

Instead of asking their children to refrain from fatty, calorie-rich fast food to shed weight, health-conscious parents in Ho Chi Minh City have sent them to sports centers offering a wide variety of intensive workout classes.

Despite the torrential rain on the day Tuoi Tre (Youth) newspaper reporters visited it, Phan Thi Phi Yen, a 29-year-old coach at Yoga Secret Club in District 12 began her yoga class for children.

The youngsters attentively performed the technically challenging maneuvers including the ‘cobra,’ on their own mats, to the delight of their parents.

After 40 minutes, the kids moved on to group movements.

"We took up yoga two months ago. We were fatigued at first but feel much better now. The instructor is extremely fun to be with,” Minh Thao, 7, and Gia Linh, 10, said while wiping sweat off their foreheads.

Linh said she had skipped some of her English classes to make it to this yoga practice, which meets twice each week.

“Today’s kids are typically weighed down with overloaded academic schedules, resulting in parents’ undue emphasis on their children’s studies over their physical activity. This has made them even more prone to obesity,” the little girl’s mother said.

“This kind of class helps my girl stay fit and boost her eagerness to take academic subjects at school,” she added.

Vietcharm weight loss classes, offered by Tran The Minh, 36, provide training for around 20 children aged eight and above.

Minh acknowledges the rising need for such classes, meant for minors who already suffer or are at risk of obesity.

“Some 12-year-olds are 1.5m tall but weigh 80 kilograms. Without timely intervention, they will easily contract many diseases, including heart diseases and other obesity-related illnesses,” Minh noted.

According to Nguyen Tan Dat, a 26-year-old coach at weight loss classes offered by a club in Tan Binh District, enrollees are typically tested with simple exercises on their first day in class.

Exercises testing stamina, cardiovascular capacity and workouts with increasing levels of difficulty follow in the next days.

Anh Nguyet has sent her 9th grade son in who boasts a staggering height and weight of 1.8 meters and 120 kilograms.

Training minors seem a breeze at first glance, but the coaches all revealed that the job involves hard work.

The most challenging parts are engaging children, most of whom cannot stay still for long, and keeping them engrossed during the session.

“Some lazy, restless kids keep disrupting their classmates’ practice efforts. In such cases, we gently explain to them the importance of practice, cheering them on and showing a sense of pride and teamwork,” coach Minh added.

Yen, another instructor, said that she keeps constant watch on her young students and seeks their feedback after each session to make sure they are not exhausting themselves.

The workouts are also tailored to fit children’s limited concentration spans by combining exercises with movement-rich, fun-packed games to help them burn off their excess fat and speed up their overall bodily growth as well.

Minh noted that one of the major hurdles is the youngsters’ lack of persistence, as many of them are forced to take the classes by their parents.

According to the coaches, intensive workouts account for a mere 30-40 percent of weight loss efforts.

The remaining 60-70 percent depends on the children’s daily diet and schedule, as it is hard to lose weight despite rigorous training if one keeps gulping down fatty food and going to bed in the wee hours.

Dat said he always insists that parents help their food-obsessed kids stick to a strict diet as “a week’s arduous training would go to waste with just one sumptuous meal of fried chicken.”

Children need at least 60 minutes of physical activity per day which can be divided into short drill periods of between 10 and 15 minutes each, Dr. Nguyen Trong Anh, deputy chair of the Ho Chi Minh City Sports Medicine Association, advised.

He also warned against putting minors on stringent diets which may hamper their bodily growth, and urged that children practice on certain pieces of equipment only, not all devices in gyms which are mostly meant for adults.