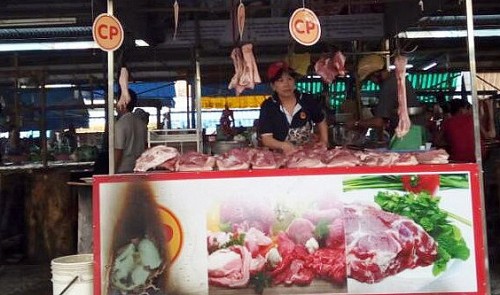 One man's meat is another man's poison, especially when the meat is safe and clean pork.

A booth selling standard safe and clean pork at Uyen Hung Market in the southern province of Binh Duong was burned and destroyed following its opening day last week, the provincial department of animal health said on Wednesday.

The safe-pork stall, operated by the Binh Duong branch of CP Vietnam, attracted a number of market-goers during its inauguration on the morning of April 12.

That evening, the owner was shocked to find that someone had set fire to her booth.

Two days later, on April 14, the owner returned to the stall and found the sign and furniture covered in black paint in what appears to have been an attack by conventional meat sellers unable to cope with the current trend toward food safety underway in Vietnam.

The sabotaged booth is one of many safe-pork vendors opened under a program backed by the provincial department of animal health.

The incident has been compared to situations where GrabBike drivers were assaulted by traditional xe om (motorbike taxi driver) for ‘stealing’ their livelihood.

Local police are still searching for the culprits.