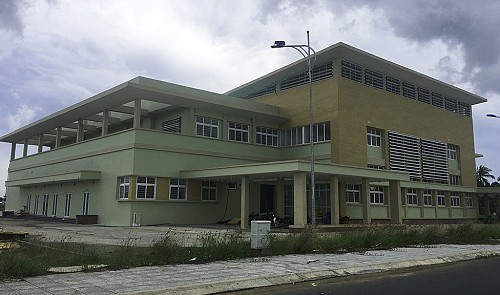 A security guard at a cancer treatment center in southern Kien Giang Province was found dead early Thursday morning, less than two weeks after an expensive radiation shield was stolen from the facility.

Police have yet to release the cause of death, leaving more unanswered questions in a case already shrouded in mystery.

The victim, identified by police as Hoa, was discovered dead at around 3:00 am on Thursday while guarding the Center for Nuclear Medicine and Chemotherapy at Kien Giang General Hospital in southern Kien Giang Province, the same facility where a 4.2-ton radiation shield was mysteriously stolen two weeks ago.

Early reports falsely estimated the piece of equipment’s weight to be only two tons.

The 66-year-old man was stationed at the hospital under a contract between the facility and Kim Hai Quan, a security service provider.

According to a source, the stolen radiation shield is a lead sheet used to protect lab technicians from dangerous radiation while manufacturing fuel for radiotherapy.

The facility is being built with funds from foreign sponsors, with the total value of equipment, including the stolen shield, amounting to over six million Euros (US$6.7 million), according to Kien Giang Department of Health, the project’s developer.

At the time of the robbery, the venue was still under construction and the equipment was not yet fully installed.

“An autopsy is being done to determine the cause of death,” Tin said.