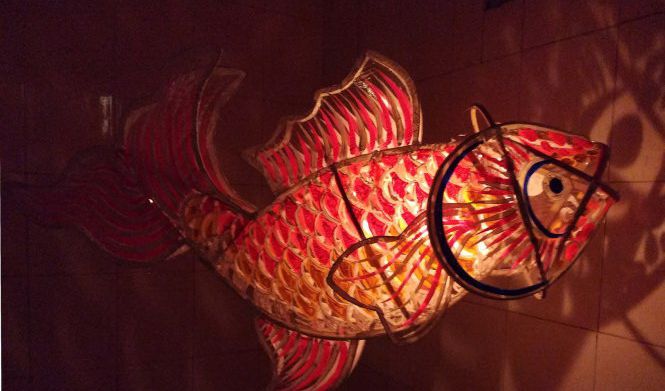 Born to a family of noble descent in Vietnam, Trinh Bach settled overseas in 1972.

He then gave up his guitar teaching job in the U.S. and returned to Vietnam, where he has since worked on projects to re-create royal outfits and revive age-old arts, including the craft of making traditional lanterns and giong bot (richly-colored flour figurines).

Bach is poised to showcase his work, which is modeled after original designs at the Ancient Town Cultural Exchange Center, Vietnam Museum of Ethnology and Temple of Literature in Hanoi, considered the country’s first-ever university, during this year’s Mid-Autumn Festival, which falls on October 4.

The festival, typically celebrated on the 15th day of the eighth month in the lunar calendar, is considered a special occasion for family reunions, with the original shape of the much sought-after mooncakes indicative of the celebration’s meaning.

During the festival, family members get together, make offerings to their ancestors and enjoy mooncakes over fragrant tea while admiring the full moon.

Bach’s body of work, which he has crafted from his enduring memory and yellowing photographs and sketches, bears various shapes including the fish, rabbit and butterfly.

His works are a far cry from the gaudy, mass-produced lanterns currently available on the market.

Bach points to a pair of white mice figurines meticulously crafted by Pham Nguyet Anh, the sole survivor of the Dong Xuan giong botmaking school in Hanoi, as an example of high craftsmanship despite its plain design.

“Their snout hairs are made of the dyed chicken feathers, not of plastic,” he noted.

“For nearly two decades, I planned to revive the dying art of giong bot and the craft of making traditional courtly footwear but failed to. Surprisingly all these projects were completed only a few months ago,” the veteran artisan shared.

“As a child, I would draw the lanterns and giong bot toys my father bought me. I distinctly remember the details of the lanterns and the postures of each of my giong bot collections,” Bach said, explaining how he could instruct today’s workers to reproduce models available prior to 1975.

Most of the lanterns designed in the early 20th century in Hanoi and captured by photographers Léon Busy, Albert Kahn and French researcher Henri Oger were crafted by artisans in Bao Dap Village, located in Nam Truc District in the northern province of Nam Dinh.

Following a political upheaval after 1954, Bao Dap villagers no longer made traditional lanterns.

A number of these practitioners moved southward and settled in Phu Binh, a famed lantern-making quarter that spans parts of District 11 and Tan Phu District in Ho Chi Minh City.

However, the long-standing craft withered in Phu Binh not long after that until the mid-1980s, when residents made attempts to bring the practice back to life.

Their business, however, failed to take off as expected and languished amongst competition from plastic, battery-operated Chinese lanterns that soon became popular.

Bach also expressed disappointment at the lack of interest shown by today’s generation in most craft villages throughout Vietnam, leaving a number of producers completely heirless.

In times gone by, artisans would stick real rabbit hairs to different parts of lanterns for decorative purposes.

Though imitation hairs are now a legitimate substitute for real rabbit hairs for various reasons, lantern-makers should know how to trim the hairs to make them lifelike.

Prior to 1975, high-quality Japanese cellophane was adopted, allowing round metals to be attached to the toys for decorative effects, Bach recalled.

Today’s Chinese cellophane, however, is crumbly and thin, making it impossible to affix the decorative round metals.

Makers also find it difficult to paint on the Chinese cellophane.

“Even highly-skilled practitioners have yet to master how to paint fish scales on lanterns in the old way. However, those I’ve been working with are giving it their best shot,” Bach noted.

Among them is Dang Van Hau, who trained with Bach when he was only 13 or 14 years old, and has in the last decade successfully restored almost all of the giong bot making schools, including the art of dying.

Bach said that he had recently displayed some traditional Mid-Autumn Festival giong bot on the Hanoi Pedestrian Street, where they were warmly embraced by adults and children alike.

“Our Vietnamese folk culture has an irresistible allure, which I would like today’s children to relish just as I did,” he stressed.