A marathoner from Vietnam outpaced over a hundred competitors to finish first in the 100-kilometer trail of the 2017 Vietnam Mountain Marathon (VMM) on Saturday.

One-hundred and twelve ultramarathoners competing in the 100km trail departed at 10:00 pm on Friday, and had 24 hours to finish the race, which covered all types of mountain range terrain, including river crossings.

Despite racing against strong contenders from the Philippines and Denmark, Tran Duy Quang was the first to cross the finish line at noon after 13 hours and 17 minutes, making him the first Vietnamese national to win the race.

“I had aimed for the 15-hour mark, but was luckily able to outdo myself today,” said Quang, who was last year’s fourth-placed runner in the same distance. “I’m exhausted after running for over 13 hours straight, but my feeling now is amazing.”

All competitors who were able to reach the finish line were awarded a medal to certify their achievement.

The Vietnam Mountain Marathon, organized by Danish tourist company Topas Travel, is among the biggest marathon events in Vietnam, including 10km, 21km, 42km, 70km and 100km categories across mountainous Sa Pa District in the northern province of Lao Cai.

The annual competition was first held in 2013, support from the Embassy of Denmark in Vietnam, and has since attracted an exponentially growing number of participants thanks to the breathtaking trails of Sa Pa.

This year, around 2,500 marathoners from 50 countries and territories signed up for the fifth edition of the event, which ran from September 22 to 24. 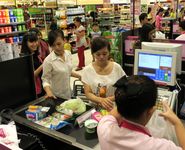