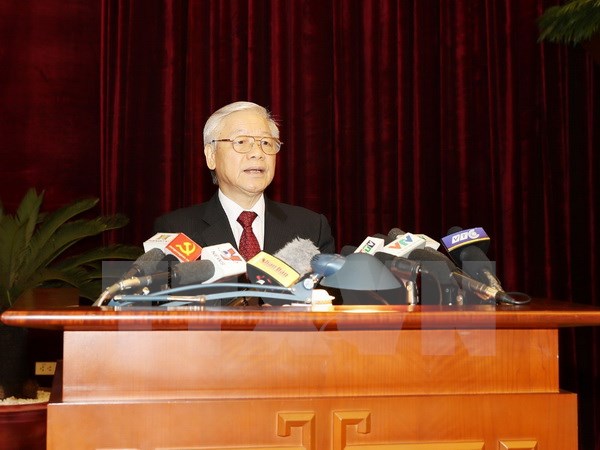 General Secretary of the Communist Party of Vietnam Nguyen Phu Trong announced several important issues to be discussed at the meeting, scheduled for October 4 to 10 in Hanoi.

During his opening speech, the Party chief stressed the importance of streamlining the political system, noting that the current system is bulky and inefficient due to the overlap in the functions and authority of certain organizations.

There is an abundance of inadequacies in the structure and quality of public servants and officials, General Secretary Trong continued, adding that too many people receive salaries from the state.

It is necessary to carry out a comprehensive reform in parallel with the renovation of leadership methods, personnel streamlining, and salary reform, the leader stated.

He also pointed to the necessity of suitable long-term and short-term roadmaps that focus on dealing with problems affecting the country’s political system and governmental organizations.

There are currently about 58,000 public non-business units with a combined 2.5 employees across the country.

These organizations provide public services related to every person, family, and aspect of society through healthcare, education and training, science and technology, culture, and sports.

Reforming the organization and improving activities of these units are essential to the rapid and sustainable development of the country, according to General Secretary Trong.

Members of the 12th Party Central Committee will assess the situation and analyze the significance of hastening the reform efforts of public non-productive institutions and state-owned enterprises, he continued.

They will also look into the necessity of enhancing the private funding of public service supply and establish a guide for reforming and improving public non-productive units’ organizational and operational quality.

Aside from simplifying the political system, the Party chief also highlighted other important topics including improvements to growth quality and business environment, ensuring rapid and sustainable development, and restructuring credit organizations, public investment, and state-owned enterprises.

As Vietnam is now dealing with an aging population, Trong suggested that the committee focus on discussing the necessity of controlling population scale and quality through policies that maintain current birth rates.

Mentioning the improvement of the people’s health, he considered it necessary to mobilize, allocate, and make effective use of all resources that improve public healthcare services.