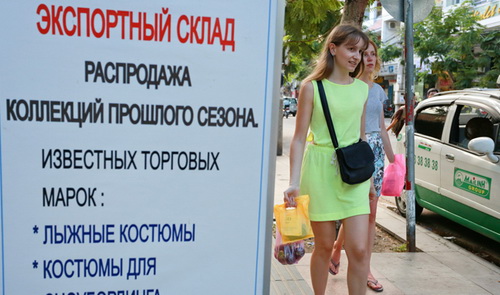 While the number of tourists from other European countries has been on a decline, common tourism spots around Vietnam are being flooded by Russian holidaymakers.

“People usually think Russian tourists tend to practice thrift during their tours, but they in fact can spend up to VND2 million a day, so long as the services are of good quality,” said Nguyen Quoc Khanh, owner of a restaurant at Mui Ne, where groups of Russian-speaking travelers were spotted on April 30.

There are so many Russians in the area that many restaurants, ticket agents, cafés, and massage parlors have their menus written in Russian, Khanh said.

Mui Ne has emerged as a peaceful and low-cost relaxing destination for Russian holidaymakers, according to Alexandre and his wife, Cawa, a couple from Irkutsk.

Ton That Hung, who works at Coco Café, a tour organizer, said Russians account for nearly 30 percent of the company’s total customers.

“However, while Russian tourists want to enjoy more than just beach bathing and eating seafood, local services fail to meet their demand,” he noted.

Ngo Vo Bach Viet, head of the Nha Trang representative office of Anh Duong Travel Co, said his company is bringing some 1,000 Russian tourists to the coastal city on a daily basis via 19 direct flights between the area and 22 cities in the Eurasian country.

Russian holidaymakers account for 70 percent of total foreign customers, and 50 percent of the total revenues, according to Nguyen Huu Nghia, deputy CEO of the Hoan Cau Khanh Hoa Co Ltd, the operator of the shopping center.

Although the number of Russian tourists to Vietnam has constantly risen, the figure is still modest compared to the 45 million exits from Russia for overseas holiday every year, according to tourism experts.

Vietnam thus has to continue to boost the tourism promotion to lure more customers, and investing more on the training of Russian-speaking tour guides, they said.

The Ministry of Culture, Sports, and Tourism has recently approved a VND6.3 billion program for Khanh Hoa to have a well-trained force of Russian-speaking tour guides.

“Russian tourists will be the main market of Nha Trang in the future, and we are considering organizing new cultural activities and increasing the quality of local services to serve them,” said Truong Dang Tuyen, director of Khanh Hoa Department of Culture, Sports, and Tourism.