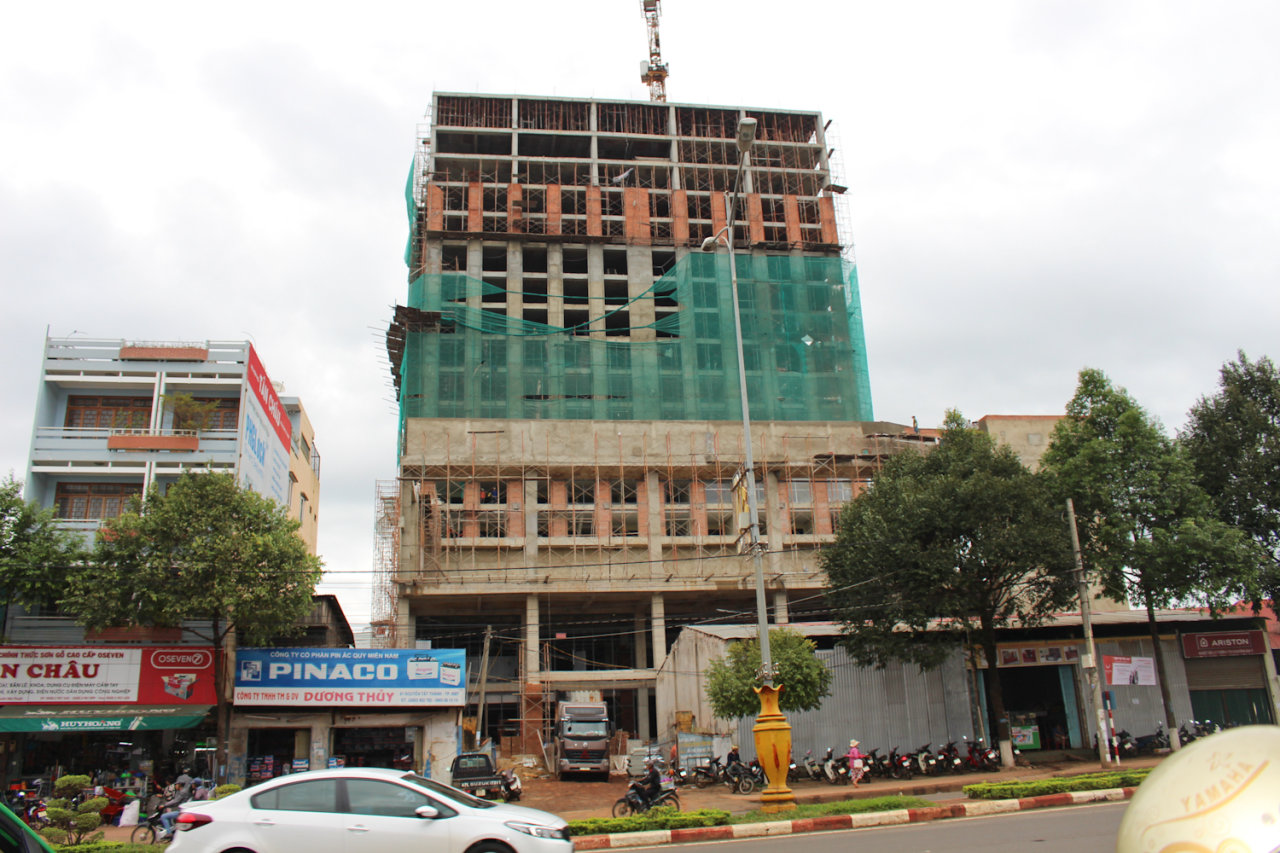 A hotel under construction in Dak Lak Province, located in Vietnam’s Central Highlands, has been found to have been without a proper building permit for over six months, adding to its developer’s list of violations in the execution of projects across the country.

The construction of the Muong Thanh Hotel in Buon Me Thuot City, Dak Lak, was lasted nearly half a year before officials discovered it lacked a legitimate building permit.

The 244 room project, carried out by the So 1 Dien Bien Construction Company under Muong Thanh Corporation, covers a 2,700 square meter lot.

The illegally constructed building has already reached 20 stories and the developer recently announced the recruitment of hotel managers and staff members, according to Tuoi Tre (Youth) newspaper reporters’ observation on Thursday.

Some local residents stated they had seen several teams of officials inspecting the construction site, though progress on the building seemed to be uninterrupted.

After being notified of the situation, Pham Van Lap, deputy director of the Dak Lak Department of Construction, summoned local inspectors for verification.

According to inspectors, the developer was warned of their violations while they were building the hotel’s fourth floor.

During a second examination on October 13, the officials slapped Muong Thanh Corp with a VND40 million (US$1,771) fine which has yet to be paid.

Deputy director Lap asserted that his department’s inspectorate and the People’s Committee in Buon Me Thuot hold full responsibility for the poor management and lack of coordination between the two agencies.

Meanwhile, an official from the Buon Ma Thuot administration contradicted that the provincial Department of Construction should also be held responsible for the situation.

“They have the power to suspend the construction and penalize its developers while our authorities are limited in their power,” the city official said.

This is not the first time Muong Thanh Corp has violated laws on construction projects in Vietnam.

At the time, the building’s 43rd floor was under construction when authorities handed out penalties for violating provincial requirements limiting buildings to 40-storyes.

A similar violation resulted in the corporation being fined VND1 billion ($44,288) by authorities in the southern province of Binh Thuan in 2014.

The firm built a seven-story hotel in the province while it was only permitted to construct four floors.

Also in 2014, authorities in Ho Chi Minh City ordered the corporation to suspend the construction of its office building in Distinct 1for failing to present a building permit.