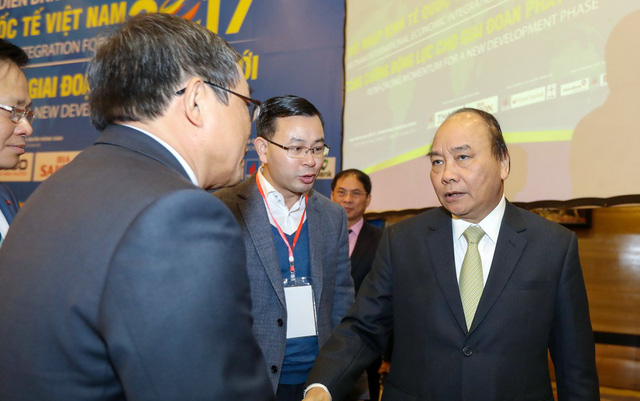 The US$4.8 billion worth of stakes a Thailand-based company has managed to purchase from Vietnam’s top brewer Sabeco is the latest example of just how ‘vulnerable’ Vietnamese businesses are to acquisition by stronger foreign enterprises.

The huge gap on market capitalization between Vietnamese and foreign companies was among the top topics discussed at the Vietnam International Economic Integration Forum 2017 in Hanoi on Wednesday.

The event was held a matter of days after Thai Beverage, through a local unit, won via an auction the rights to buy a nearly-54 percent stake worth $4.84 billion in Sabeco, marking Vietnam’s biggest ever privatization.

Vietnam Beverage is owned by Vietnam F&B Alliance Investment Company, which is 49-percent owned by BeerCo Limited – an indirect but wholly-owned unit of Thai Beverage, Reuters reported, citing official documents about the companies.

Experts expressed concern at Wednesday’s forum that similar acquisitions may take place in the near future, given the ‘modest’ scale of Vietnamese companies compared to their regional peers.

Dang Pham Minh Loan, deputy managing director of VinaCapital, a private equity and venture capital firm, cited data from Vietnam’s top 30 biggest companies and statistics from other Southeast Asian countries as saying that the average market capitalization of Vietnamese companies is only more than $3 billion.

This is far from comparison with the $15 billion figure of Singapore, and $11 billion and $10 billion of Indonesia and Thailand, respectively.

With a leading Vietnamese company having a market capitalization only equal to one fifth of that of a Singaporean firm, it will take the latter only three years to accumulate enough profit to acquire the former, Loan said.

The VinaCapital executive also recounted an investment her company made three years ago to prove that Vietnamese companies are also ‘vulnerable’ when it comes to free trade and integration.

In 2014, VinaCapital invested in a leading consumer goods company, only to see its stock price losing 50 percent of its value in 2017, as the merchandise it is trading is set to enjoy import duty exemption from 2018, pursuant to a free trade agreement.

“To Vietnamese businesses, challenges outplay chances when it comes to integration,” Loan commented.

“Many [Vietnamese] firms join the integration process with fear, instead of embracing chances.”