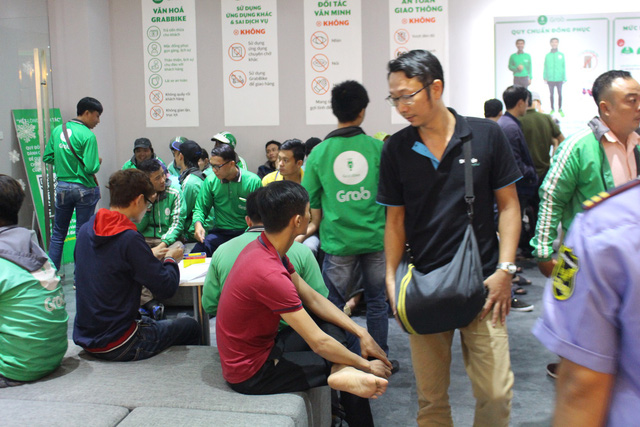 Scores of GrabBike drivers in Ho Chi Minh City launched a strike on Wednesday to show their dissatisfaction with the higher commission ratio applied by the ride-hailing service from this year.

The on-strike drivers turned off their app and flocked to Grab Vietnam’s Ho Chi Minh City head office in District 10, but no agreement was reached between the company and its drivers.

One driver, Thanh, told Tuoi Tre (Youth) newspaper that Grab Vietnam hiked the commission ratio, which it calls an ‘app usage fee,’ from 20 percent to 23.6 percent on January 1.

Like other ride-sharing apps, Grab splits the revenue earned from each ride with its drivers, who it refers to as ‘partners.’

The new ‘app usage fee’ means GrabBike drivers will have to pay Grab Vietnam 23.6 percent of the fare for each ride he or she completes.

“This is unreasonably high and we have decided to go on strike to show our protest against the new policy,” Thanh told Tuoi Tre.

Hundreds of drivers gathered at the Sala urban area on Tran Nao Street in District 2 before heading to the District 10 office at 10:00 am.

Grab Vietnam representatives invited the angered drivers to a private meeting room, but those who returned from the talks said “nothing was resolved.”

The ride-sharing service told drivers that it will solve the problem on a case-by-case basis, and any further complaints will be addressed next week.

Of course, the drivers left the strike disappointed.

Grab Vietnam said it has had to elevate its commission ratio to fulfill personal income tax obligations for its partners.

Drivers are supposed to pay taxes on the 80 percent of revenue they receive from each ride. With a tax rate of 4.5 percent, this translates into 3.6 percent of the total fare.

This means that for every ride, a driver will now have 20 percent of the revenue deducted as payment for the ‘app using fee’, and an additional 3.6 percent for personal income tax coverage.

As part of its support policy, Grab Vietnam sometimes gives cash bonus or monetary support to drivers who have excellent performance or who work during rush or late-night hours.

The company said this support, based on driver revenue, is now subject to a one percent tax deduction, and other bonuses have a ten percent deductible.

This is a double whammy for drivers, as “Grab has significantly reduced such support for us,” a GrabBike driver named Nguyen Tuan told Tuoi Tre.

“While the bonuses decreased, the share we have to pay Grab for each ride just rose, putting us in a hard place,” he said.

“If [Grab] refuses to reduce the commission ratio, we will switch to [working for] other apps.”

Grab Vietnam said the new policy does not mean all drivers will have to pay taxes.

By the end of every month, if drivers’ total earning, including revenue and bonuses, is below the VND8.3 million threshold, they will be refunded the temporarily deducted tax payment by the tenth day of the following month, according to the company.

If the drivers make more than that benchmark, the temporary deduction will become official tax payment.

The explanation does not please the drivers, who say it is unreasonable to mandate the upfront deduction.

“The current ride fare is already dirt cheap and the higher commission ratio only puts more pressure on us drivers,” Tuan said.

“This is not to mention that Grab Vietnam continues to recruit new drivers, increasingly making the market more crowded.”

For instance, it costs only VND33,000, or less than $1.5, to travel the 7km route from Ben Thanh Market in District 1 to Tan Son Nhat International Airport in Tan Binh District.

“We could not understand why Grab set the commission ratio too high, while we have to cover all expenses, from fuel and mobile data to bike maintenance and repairs,” Tuan said.

Grab made its Vietnam debut in 2014, launching in Hanoi and Ho Chi Minh City.

Since then, the Malaysia-based company has adjusted its registered capital five times, totaling VND20 billion as of March 2017, according to Vietnam’s finance ministry.