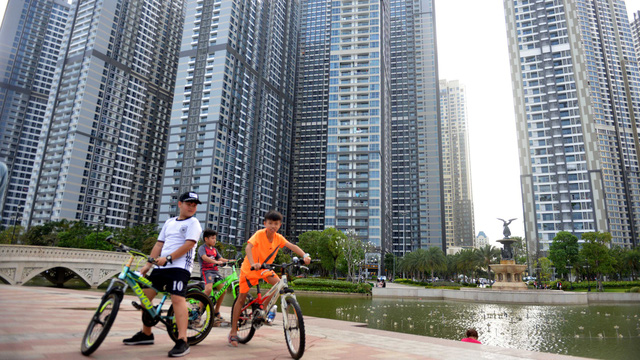 As the number of Vietnamese people with a fortune worth at least US$1 billion keeps increasing, it is time the country reconsidered the ‘anti-rich’ mindset, Tran Dinh Thien, head of the Vietnam Institute of Economics, has said.

The way the public views the affluent and policies that assist people to get rich should both be changed to boost the country’s growth and prosperity, Thien told Tuoi Tre (Youth) newspaper in an interview.

The interview was done shortly before four Vietnamese were named in a 2018 billionaire list by Forbes.

Citing the annual 2017 Wealth Report by Knight Frank, Thien said the number of Vietnamese superrich, those with a fortune of more than $30 million, is expected to jump 170 percent in the next decade, compared to the 150 percent growth of India and 140 percent of China.

“In an article sent to the local press on March 1, Vietnamese Prime Minister Nguyen Xuan Phuc underlined the need to make the private sector an important motivation for the economy,” Thien said.

“Looking at the local stock market, Vietnam currently has nearly ten U.S. dollar billionaires, in terms of the market capitalization of their companies, and they are all in the private sector.”

How would you comment on the increasing number of private companies with multibillion-dollar revenue, and that of Vietnamese U.S. dollar billionaires?

In the past only state-run enterprises were able to make billions of U.S. dollars in revenue. Even so, we used to be concerned that these state companies, with all the preferential treatment they enjoy, would fail to compete with foreign enterprises. In other words, we are worried about their competitiveness in the global arena.

Now that many private companies have also reached the $1 billion revenue mark, it is good news, especially when these firms have grown up in the teeth of competition.

The rising number of wealthy people illustrates that the economy is creating more opportunities to get rich, and that the private sector has indeed become a motivation, or even foundation in some specific areas, for growth.

There are many unsolved issues when we talk about the growth of the private sector. Some of these may sound trivial, but they are really important, such as the public perception about rich people.

A few individuals, with true talent and capacity, have managed to grab golden opportunities to rise to prosperity. What matters is we have to ensure more such opportunities will come, and that people will get rich in a transparent and justified manner.

In my opinion, there are more ‘genuinely rich’ people in Vietnam than shown in statistics. Some have to hide their affluence due to some reasons, one of which is the ‘anti-rich mindset.’

We are still living in a society where rich people prefer to keep their fortune in the dark.

So does that mean we should put our trust in businesses and individuals that stand out from their peers?

Speaking from the perspective of international competition and domestic growth, I believe our country should put hope and faith in businesses that are taking the lead.

Those entrepreneurs that lead growing companies and make their way to the billionaire list are not simple individuals. People should not merely associate them with their supercars and villas.

Few would know what are really behind those material things on the surface. It may be their tough win-or-lose decisions, sleepless nights thinking about their businesses, huge competition pressure from both the domestic and international markets.

And then comes every morning’s pressure of having to have a few dozen billion dong to cover wages for a few dozen thousand employees.

We always place our expectations on businesses that are up to international standards and those with honest and transparent activities, and we always follow the world’s top billionaires. Now that some successful Vietnamese entrepreneurs are on the same list with those rich people, it is something really worth taking pride in.

If we want this country to be rich and strong, we have to have rich people and should not hold the view that anyone who is rich is ‘unusual’ in some ways.

If this mindset persists, the rich will hide their wealth, send their assets overseas or sell their companies when they reach a certain level of success.

We should set our expectations for those who never stop taking new challenges to expand their businesses, even though they have more than enough to lead a leisure life if they stop working. This is what Pham Nhat Vuong is doing with Vingroup and Doan Nguyen Duc with Hoang Anh Gia Lai.

Support the rich to help the poor

You once said we should give stronger encouragement and support to the billionaires. Are they really in need of any support?

My statement needs a little explanation. First, it is a challenge if we only rely on the poor to fight poverty; you cannot just jump out of poverty on your own.

Second, all the direct support from the government to the needy people, stated in theory and proven in reality, will never enable them to get rich but only help them to escape from poverty in the best case scenario.

The problem is if you are not rich, it is easy for you to return to poverty.

The most important force in the task of completely eradicating poverty and building a prosperous society must be those businesses and people that are capable of doing business, building up their career and ultimately becoming rich people or billionaires.

These people are those with special abilities, in the same way as scientists and doctors who are born with the talent to do research and save lives.

The government should therefore rely on this force, encouraging and supporting them to become even richer. By doing so, they will generate more jobs and opportunities for laborers to elevate their own incomes.

But the public does not keep a cautious eye on the rich for no reason. Will it take time to change the mindset?

This is correct. During the subsidized economy, when everyone was in poverty, it was really suspicious if one could become rich. But nowadays, such a point of view must be changed.

Strong private businesses and USD billionaires will not only create new jobs and give people chances to earn more, but also become ‘pillars’ to ensure the country’s economic sovereignty.

We can tell from other countries’ experience that without big corporations or billionaires, a nation cannot become a powerful state, and its economy will not be able to expand.

Many billionaires around the world also help improve the image of their own countries, and are viewed as the role models for the entire society, especially the youth. These people play a crucial role in boosting creative and startup activities.

However, I may underline here that in developed countries, the main principle of social development is “democracy – open – transparency.” In those societies, everyone tries to get rich and see them listed in the rich rankings as proof of their talent and contribution.

They want to ‘openly’ display their wealth as a pride. We have to try to do the same thing in Vietnam.

A former state official has said that Vietnamese businesses already have ability and passion, so if they are given adequate trust and conditions, they can create miracles like the U23 football team did [by finishing second] in the Asian championship in China in January. What do you think?

This statement is undoubtedly correct. Ensuring a fair business environment is all we need to see Vietnamese entrepreneurs create miracles. But there are many other things to do.

We also need more effective support from the government in terms of resource distribution and encouraging people to get rich.

If the state can put to use a better wealth distribution mechanism, we will be able to create a fair society.