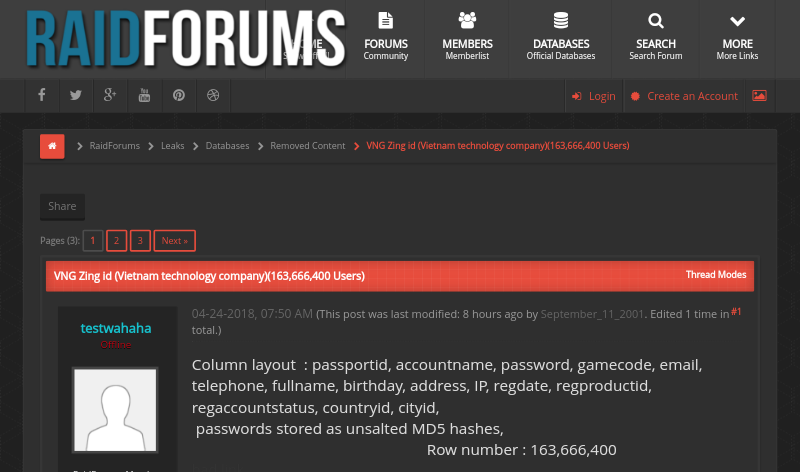 VNG Corporation, one of Vietnam’s largest technology companies, has apologized over an alleged data breach that led to the leaking of login credentials of more than 163 millions of its game accounts.

The leaked data was offered for sale on Raidforums.com, a forum for database trading, by a user who claimed to be in possession of information linked to 163,666,400 Zing ID accounts.

Zing IDs are accounts used for login to multiple VNG services including its online games, web and mobile entertainment, and the older versions of the company’s popular music streaming site Zing MP3.

In a press release on Friday, VNG did not directly confirm the data breach but admitted they had “been informed of a risk involving data leak of [more than] 160 million Zing IDs” back in 2015.

The tech company stressed that it had taken “timely technical measures” to prevent and contain such a breach.

VNG admitted that a number of accounts had been compromised nevertheless, but did not clarify on the exact number.

“The scale of the breach was limited, mostly involving game accounts without affecting other VNG services,” the press release reads.

According to the company statement, “nearly 99 percent” of the compromised Zing IDs had not been used for over a year.

The data leak does not affect Zalo and ZaloPay accounts, which are registered separately from Zing IDs, VNG says.

“We are truly sorry and would like to offer our sincere apologies to our customers for the inconvenience,” a VNG representative said.

“We commit ourselves to protecting customers’ rights and online safety, and are resolved to address any issue related to the breach.”