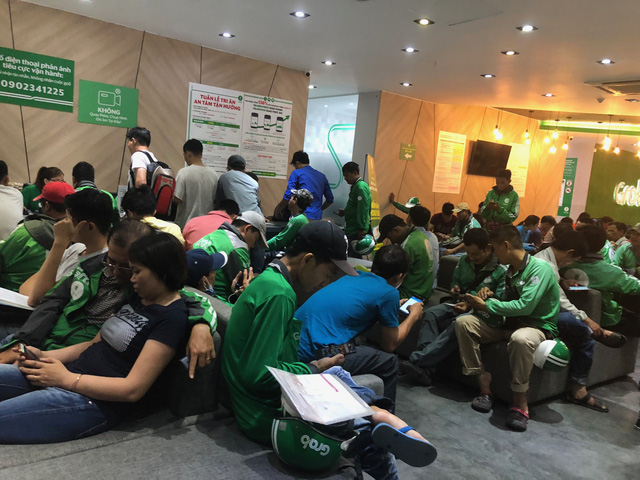 ​Grab hit by complaints after dominating ride-hailing industry in Vietnam

Almost two months after Grab became the dominant player in the ride-hailing industry with Uber’s exit from Vietnam, commuters and drivers have continuously complained about its exorbitant fares and poor quality.

Grab officially took control of Uber in Vietnam and across seven other ASEAN countries on April 10, claiming that it would not take advantage of the situation to charge high rates.

But in reality, its price is still surging.

Hoang Khanh, a resident in Ho Chi Minh City’s District 4, complained that Grab charges are now higher than before, even for the same distance, during the same time frame.

In the same situation, a local in District 7 identifying herself as Hanh was shocked to see the fare of VND320,000 ($14) when booking a trip about 14 kilometers, from her place to Tan Phu District’s Tan Huong Street, during a high-demand period.

According to many passengers, Grab rates have unreasonably increased by at least 25-30 percent, regardless of time or traffic conditions, since the Uber takeover.

Grab commuters also complained that the tech-based motorbike taxi service currently does not offer appealing promotions to cash-users, forcing them to purchase via its in-app mobile wallet Grabpay that is linked with users' credit/debit card.

Jerry Lim, director of GrabTaxi Vietnam, admitted to Tuoi Tre (Youth) newspaper that Grab has increased its rates since 2017 due to constant gasoline price hikes.

“Gasoline prices rose six times in 2017. We raise rates to be fair to our partners as drivers complain that gasoline prices are rising but our rates have not changed," Lim said.

It is becoming more difficult for customers to book rides as drivers tend to cancel trips as they wish or even accept the booking but never show up, causing more trouble for Grab users.

Quite a lot of GrabBike drivers took to the Grab office in District 10, Ho Chi Minh City on Monday morning to protest having their accounts locked for "unknown reasons" by the company.

Do T. Ng., a GrabBike driver in Binh Tan District, said that Grab suspended his driving account since Saturday after he canceled an unexpected booking from a customer.

“When I arrived at that displayed address, the customer asked me to carry two more children, who were over 12 years old,” Ng explained.

Ng. turned down the request and asked the customer to call off the booking since riding three people violates Vietnamese law.

However, the customer refused to cancel the trip and the two sides had a quarrel, after which the ride booker reported it to Grab, which led to the driver’s account suspension.

Similarly, some drivers also moaned that Grab always listens to one-sided reports from passengers, suspending the accounts of their drivers without any verification.

“That causes Grab drivers like me to become idle several days before the company solves the issues,” Ng. complained.

The drivers suggest that the ride-hailing operator should inform their partners via text messages or phone calls of any reported issue before making any further decision.

In a situation where both Grab drivers and customers are hurt, Go-Jek from Indonesia is getting ready to ride in Vietnam.

A local app, VATO, which claims to have received $100 million from Vietnamese bus line Phuong Trang, has jumped in to fill the void left by Uber though it is not yet popular with riders.

At the same time, technology motorbike firm Aber will also arrive in Hanoi next week.

The Aber app has been developed since 2015 by a group of Vietnamese engineers in Europe.

The founders have piloted some programs in a number of Southeast Asian countries this year.