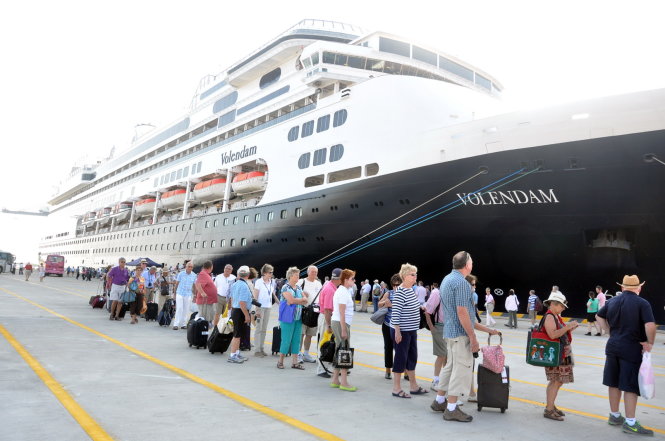 Ho Chi Minh City has become less attractive as a destination for luxury tourists as its seaports apparently prefer serving cargo ships than cruise vessels, experts complained at a tourism dialogue on Thursday.

The event was held by the Ho Chi Minh City Department of Tourism to discuss success and challenge of the state management on tourism in the past 25 years.

While Ho Chi Minh City has been listed in the itineraries of several cruise ship operators, the giant vessels carrying cash-rich visitors just could not dock at the southern Vietnamese metropolis’ ports as there were no berths left for them, according to industry insiders.

This was what happened to the Ovation of The Seas, one of the world's most innovative ships, as it carried 4,000 passengers of a variety of nationalities, and 1,600 crew members to the municipal Phu My port on April 16.

Even though the cruise ship operator had registered for a berth at the port 18 months in advance, there was no available berth for Ovation of The Seas upon its arrival to Saigon waters, leaving the tourists and crew members ‘floating’ off the Vietnamese city.

“The port was simply filled with cargo ships and there was no room left for the cruise ship to berth,” Ha Bich Lien, senior advisor of two leading shipping lines from the U.S. and Germany said at the event.

No berths for cruise ships

Ovation of The Seas has therefore canceled its plan to bring another 4,800 visitors to Ho Chi Minh City on October 7 due to no anchorage space. Likewise, a trip planned for September 1 of the Voyager of the Seas cruise vessel with 2,800 passengers onboard has been scrapped for the same reason.

According to Lien, the current lack of berths is a bottleneck, a "terrible" problem that blocks tourism development in Ho Chi Minh City.

“What’s the point of inviting cruise ships to visit the city when you have no berths to receive them?” Lien questioned.

"Having boats without berths is meaningless.”

The major cruise ships in the world can carry a very large number of tourists, from 3,000 to 5,000 per trip, most of whom are European and can spend an average of about US$100 per person per day when in their destination.

Failing to allow those ships to dock at ports in Ho Chi Minh City will cause many travel companies to lose customers, and local businesses and services to miss a large amount of revenue, according to industry insiders.

But Bui Ta Hoang Vu, director of the Ho Chi Minh City Department of Tourism, argued that seaports refuse to reserve space to receive cruise ships for a reason.

Vu, on the other hand, admitted that transport infrastructure is a major challenge for tourism development not only in Ho Chi Minh City but also in the whole country.

The director reported that more than 80 percent of visitors choose to come to the southern metropolis by airway, while the city’s Tan Son Nhat International Airport has been overloaded.

Furthermore, the railway system has not been improved. The road system is relatively acceptable, but still pales in comparison to those in several other provinces.

At the same time, the lack of berth for both small and large ships puts the municipal tourism sector at a disadvantage by stripping its of the opportunity to serve a very potential source of customers.

According to Lien, Resolution No.08 of the Government outlined priorities for tourism development, including sea tourism.

“City leaders and state management agencies should quickly find solutions to this problem," Lien underlined, reiterating a government resolution which stipulates that sea tourism be among the priorities of Vietnam’s tourism development.