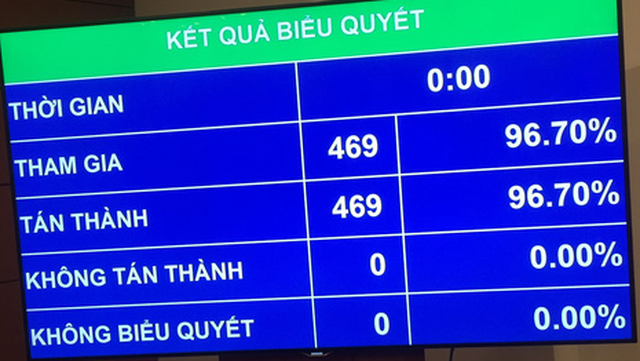 Four hundred and sixty-nine legislators voted in favor of passing the resolution, with no objections or abstentions.

Sixteen lawmakers, or 3.3 percent of National Assembly members, were not present to cast their vote.

The ballot’s result means Vietnam has officially ratified the landmark deal, making it the seventh signatory to do so after Mexico, Japan, Singapore, New Zealand, Canada, and Australia.

After U.S. President Donald Trump pulled the United States out of the Trans-Pacific Partnership (TPP) agreement last year, Japan took a leading role in pushing for a replacement pact known as CPTPP, or TPP-11.

CPTPP, signed in Chile on March 8, is the third largest free trade area in the world by gross domestic product (GDP), after the North American Free Trade Agreement and European Single Market.

The provisions of the agreement specify that it enters into effect 60 days after ratification by at least 50 percent of the signatories, or six of the eleven participating countries.

The sixth nation to ratify the deal was Australia on October 31, with the agreement coming into force on December 30.

Vietnam’s ratification of CPTPP represents an important political decision and stands to affirm the country’s activeness in international integration, the National Assembly Standing Committee said in a statement.

The move is expected to help improve the internal strength of Vietnam’s economy and its resilience against impacts of the global economy, while being a driving force in negotiations for other free trade agreements, the committee said.