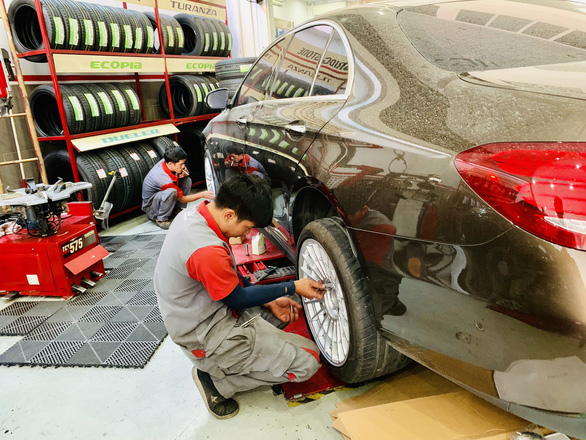 Residents in Ho Chi Minh City have been taking their cars to local auto shops to give them a good maintenance and upgrade ahead of the Lunar New Year festival.

Although the cost for these services is rather expensive, multiple automobile repair shops in the southern metropolis are overloaded with customers due to a surge in demand at this time of the year.

Some shops even require car owners to make an arrangement several days in advance.

Polishing or interior cleaning costs approximately VND1.5 million (US$64.5) to VND2 million ($86), depending on each type of car.

According to Phan Thanh Long, owner of the Thanh Long auto shop on Pham Van Dong Street in Thu Duc District, the facility serves an average of 50 customers a day.

“Car maintenance is really important, especially when people need to drive to other provinces this Tet holiday,” Long stated.

“Replacing a tire costs VND1.5 million to VND5 million [$215] depending on each type of automobile,” he added.

At a larger-scale shop named M-Auto on Hoang Dieu Street in Thu Duc, clients have been taking their four- and seven-seater cars here for maintenance and interior renewal services, as well as to install extra tools such as body kits and 360-degree dashboard cameras.

Minh Tien, who runs an auto shop in Binh Thanh District, stated that an increasing number of customers have brought their automobiles to his facility to install such accessories as subwoofers, DVD players, HUD glass, and tire pressure sensors.