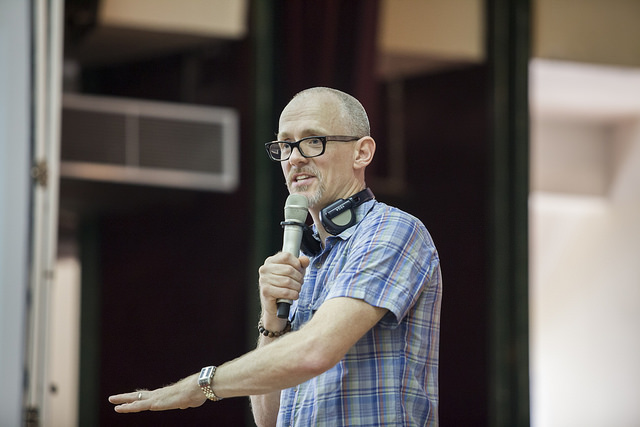 A successful British startup founder shares his view on the attitude Vietnamese startups take on understanding other cultures and why that may be holding back their dreams of international expansion.

Mark Gilligan, founder and CEO of Blacktrace Holdings Ltd., sat down with Tuoi Tre News to share his views on the fortunes and follies of Vietnamese startups, as well as offer up advice to Vietnamese youth with entrepreneurial ambitions.

Gilligan, a British national with more than 12 years of experience engaging with Vietnam’s startup community, says a habit amongst Vietnamese businesses of assuming their understanding of Vietnamese consumers translates to an understanding of foreign markets is hindering their ability to expand beyond Vietnam.

Gilligan believes in global sales, a strategy which protects businesses in case of economic downturns in any one country.

“If you focus all your attention on one country, and things change in the economy of that country, your sales can die,” Gilligan said.

His approach, instead, is to keep all his eggs in separate baskets.

“If you sell things all over the world, something going wrong in one country does not matter. You can still be successful if one country is not.”

According to Gilligan, one of the main roadblocks preventing Vietnamese startups from earning global recognition is their lack of understanding of the outside world and foreign consumers.

The main difference between Vietnamese and Western consumers, he says, is the prioritization of cheap and reasonable prices.

While most developed markets tend to value quality over price, Vietnamese customers gravitate towards low prices despite compromised quality and safety standards.

On the other hand, in most global markets product quality and safety often trump cost.

“Choose a market where customers have money,” Gilligan advised students during a recent discussion on national vesus international expansion.

Gilligan highlighted fashion brand Bo Sua, coffeehouse chain Cong, and Marou, a luxury chocolate brand founded in Vietnam that now exports to 20 different countries, as some of the few Vietnamese businesses that are enjoying tremendous success.

However, Marou, for example, despite being founded and based in Vietnam, was founded by two Frenchmen and serves as supporting evidence for Gilligan’s s hypothesis that Western entrepreneurs have a heighted understanding of the world compared to Vietnamese.

“There are very few companies in Vietnam that are proudly Vietnamese and are famous outside Vietnam,” Gilligan noted in response to questioning about why Vietnamese businesses rarely set their sights on reaching across borders.

Unlike Vietnamese, people from the UK live in a multi-cultural society and enjoy the freedom to travel freely to dozens of countries which provides them with a greater understanding of different cultures and mindsets, explained the British startup owner.

He stressed that if Vietnamese startup owners want to succeed on an international scale, they need to invest in broadening their horizons by traveling and experiencing other cultures.

To Gilligan, freedom to innovate is the secret to driving a startup forward.

“What’s most important is that people are free to fight for the best idea,” he shared, adding that Vietnamese culture sometimes puts restraints on creativity and innovation due to the importance society places on hierarchical roles.

In Vietnam, this hierarchy is typically seen in the pronouns people use to address each other, which represent a respect for age.

This norm often keeps younger Vietnamese, particularly those fresh out of school, from opposing or voicing disagreement with management and senior employees at their company.

“How can you have the best ideas in the world if you don’t have freedom to fight because nobody is always right,” Gilligan added, indicating that older does not always mean wiser.

On the other hand, the Briton also remarked that starting a company in Vietnam has advantages as well.

With costs in Vietnam being cheaper than in developed countries, Vietnamese startups are able to avoid hefty overheads, meaning a smaller amount of money is at stake and less capital is needed to turn the ideas into reality.

Moreover, Vietnam’s traditional values call on many to live with their parents into adulthood so there is often little fear of not having a place to stay, according to the CEO.

Lastly, having a long history of war, perseverance seems to be ingrained in the Vietnamese mentality and serves as a great advantage.

Many are able to withstand harsh conditions and low living standards for long periods of time, while most Western countries have “had it too easy”, says Gilligan.

Issues in Vietnam’s definition of “startup”

While many Vietnamese think “startup” means tech company, many fail to recognize that any new company fits the title.

Gilligan defines startup as “a new company with a completely different idea but that has the potential to be scaled.”

“While a pho stand on the street may not be a startup, there is high-end Pho restaurant chain in England that is considered a startup because it is scalable,” he shared.