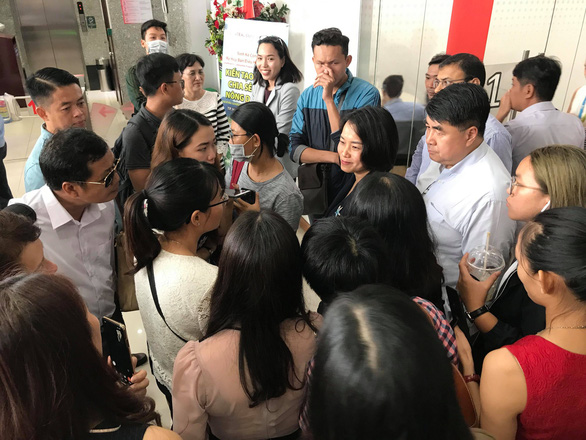 More than 40 Vietnamese suppliers on Wednesday flocked to the headquarters of Central Group Vietnam in Ho Chi Minh City to protest the company’s unexpected announcement that it would suspend placing garment orders with local providers.

Central Group Vietnam, established in July 2011 by Thai multisector conglomerate Central Group, bewildered several Vietnamese garment suppliers with an announcement on Tuesday night that it would temporarily cease purchasing their products for two weeks from July 1.

In emails sent to suppliers, the Central Group Vietnam management said it “has decided to suspend all purchasing activities regarding soft-line products from all soft-line suppliers in Vietnam, effective from July 2019,” in order to restructure its softlines business in Vietnam.

“The suspension of the ordering temporarily is owing to a change in strategy of development of our Softline concept in line with direction from Central Group in Thailand,” the announcement, obtained by Tuoi Tre News, reads.

As the suspension came into effect on July 1, it is expected that the conglomerate will not be purchasing garments from Vietnamese suppliers for the chain until after July 14.

The abrupt notification came as a shock to suppliers, many of whom flocked to the retail group’s headquarters on Phan Dang Luu Street in Ho Chi Minh City’s Phu Nhuan District on Wednesday afternoon to seek an explanation from the firm.

At the meeting, however, Central Group Vietnam deputy general director Nguyen Thi Phuong offered little in the way of new information to the suppliers, except that they should continue filling orders placed before July.

The bewildered Vietnamese suppliers left feeling indignant due to the high inventories they had stockpiled and planned for sales to Big C, not to mention nearly-finished goods they had forecast to sell as part of their current production lines.

“The suspension, even if it was only for one day, will cause us great losses,” one supplier told Tuoi Tre (Youth) newspaper.

According to another supplier who claims to have provided garments to Big C for more than a decade, the supermarket side normally proposes, discusses and negotiates new business terms with suppliers around Lunar New Year time before re-signing cooperation contracts with them in June.

“This year was no different as we received the proposal contract from Big C after negotiating and discussing detailed and specific production programs and plans,” the supplier recounted.

“Now, out of nowhere, we’re receiving emails of order suspensions,” said the supplier.

During an interview with Tuoi Tre on Wednesday afternoon, a Central Group Vietnam representative said the suspension is expected to last for two weeks and Big C will continue its sales of available garment stocks.

During the order suspension, Central Group Vietnam will check its inventories and continue accepting deliveries of previously purchased goods.

“We would never stop [selling] a line of products that makes up a large proportion of our supermarkets,” the representative reaffirmed.

“We are committed to accompanying local suppliers,” he added.

“However, this is the time for us to review our business model.”