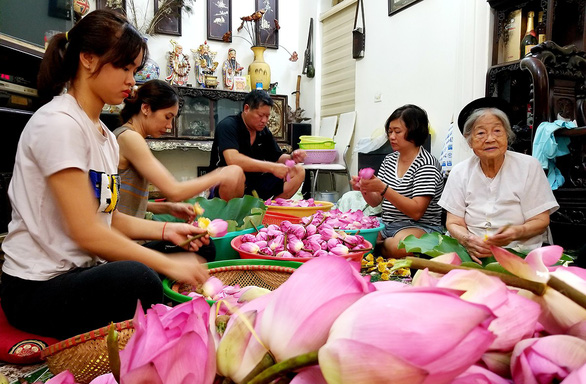 An elderly woman in Hanoi has been producing Vietnamese lotus tea using her family’s traditional method for over 70 years and continued to pass it down to younger generations.

Now 95 years old, Nguyen Thi Dan is one of the rare lotus tea makers left in the Vietnamese capital that still apply the old but gold manual method to produce people’s favorite ‘Thien Co De Nhat Tra’ (The most premium tea of all time).

Dan at the age of 25 began to make her exclusive lotus tea using the traditional method by former generations and has earned a living from making tea for over seven decades.

“Everything is manually made to maintain the most premium smell as well as taste of the lotus tea,” she said.

The best time for making lotus tea is from May to July when lotuses bloom over Hanoi’s iconic Ho Tay (West Lake) and give out fragrant odor.

Dan, along with her family members, have to pick lotus in the early morning for the best quality and carefully do everything step by step from categorizing flowers, detaching petals from the core to separating the stamen to collect the premium lotus anthers.

Anthers from a thousand lotus flowers will later be mixed and dried five times with signature tea leaves from Vietnam’s northeast province of Thai Nguyen to help incorporate the exclusive flavor into the one-kilogram final product.

Dan said the most challenging part is collecting anthers, since it requires absolute thoroughness, as well as the tea drying process due to the precise temperature needed to produce the best quality lotus tea in terms of flavor and texture.

“Lotus tea making becomes easy as long as we have enough determination and meticulousness,” said the 95-year-old tea maker.

Dan still manages to join her family in the tea-making process despite her age and never misses a day working together in happiness and laughter, which inspires her children and grandchildren to follow the family tradition of lotus tea making.

“Men can be better than women when it comes to jobs that require delicacy such as cooking, baking or manual work,” the 45-year-old man stated.

“I learned how to make tea step by step and found myself interested in this kind of work,” said 16-year-old Nguyen Thi Trang, the youngest member in Dan’s tea-making team.

“I always teach my children and grandchildren to put their heart and soul to produce the best quality lotus tea,” Dan shared her key secret of maintain the tea manufacture until today.