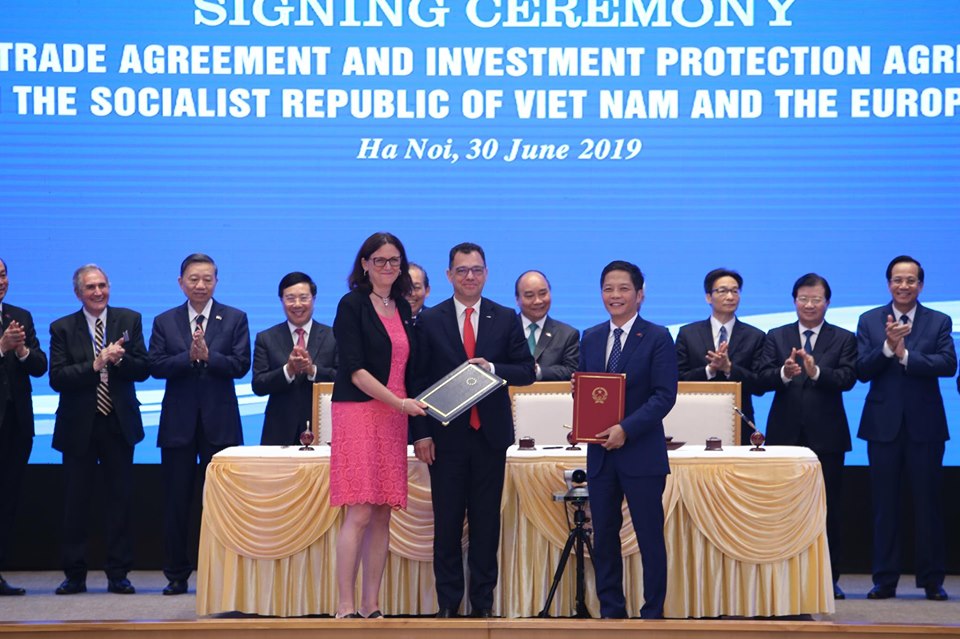 In this last part of a three-article series on Vietnam’s emergence as a hot topic for global media outlets amid rising tension between the U.S. and China, Tuoi Tre News’ Du Nhat Dang analyzes how Vietnam may use trade as an effective tool to counter challenges from the dispute.

It is a common practice to use trade as a tool to achieve diplomatic interests, when geopolitical tensions ‘lurk’ beneath trade disputes.

Trade delegations from both the U.S. and China concluded meetings in the past week with very few information being leaked out.

If there are some, it is just about a cancellation of a Chinese trade delegation's trip to American farms, which Treasury Secretary Steven Mnuchin on September 23 confirmed that he had requested himself to make sure that there would be no “confusion” at the time China committed to buying US agricultural products.

But, thing is, President Trump seemed unsatisfied and questioned about the decision, which eventually sent out misleading signals right before the start of the 13th trade talk round between the two major economies.

When US President Donald Trump was elected in 2016, international observers had reasons to worry about the relationship between the U.S. and its allies.

And the U.S.-China trade war exactly reflects these concerns: Trump administration will prioritize dealing with China over seeking to support its allies and partners in short term.

Paterson is not too hopeful about a solution to end the U.S.-China trade war.

The key is that China will not give up the role of state-owned companies or liberalize the financial system as such requirements from the United States, and the Chinese leadership will not withdraw the Party’s influence form the economy generally.

Paterson's comments were reflected as CNBC on September 23 cited Chinese media confirming that Beijing is dispatching officials to 100 private companies operating in Hangzhou – Chinese technology hub, among those are large corporations such as Alibaba, Geely and Wahaha.

When tension escalated, both the U.S. and China were in trouble, the pressure then was ... shared for the rest.

Dr. Satoru Nagao, Research Fellow at Hudson Institute, argues that there are at least two types of Trump's trade policy influence on allies and partners.

First, if the U.S. raises its tariff against an ally, such as the Japanese car industry or the European Union (EU), it will have direct consequences.

Second, when the U.S. applies this strategy on China, it has an indirect effect on the rest.

If the Chinese economy goes down, its buying of spare parts and components from other countries will be stagnant. Japan and Australia are amongst those exporting components and natural resources to China.

The problem is that the U.S. is hoping to use tariffs to hit China's economic ‘throat’ to stop the Belt and Road Initiative.

“China's problem has been caused by money. China spent too much money for its military budget. Without money, China cannot continue Belt and Road… If the U.S. curbs the income of China, U.S. allies should not depend on China economically in the long run”, Dr. Satoru told Tuoi Tre News.

Washington will therefore keep its head on geopolitical competition in the long run, and not pay enough attention to its allies in the short term.

In other words, like the conclusion from Dr. Paterson, who did a thorough study of American motives in this trade war, “The U.S. will concentrate on China, the consequences for allies are of secondary importance.”

However, China itself, in the face of U.S. pressure, also seeks to advance its ambition to fully prepare for a long-term competition.

Typically, there are several times that Beijing illegally brought the Haiyang Dizhi 8 vessel into the continental shelf and exclusive economic zone (EEZ) of Vietnam.

Observers argue that the administration is trying to challenge the legal sovereignty of other countries to create momentum for closing the Code of Conduct in the East Vietnam Sea (COC) in its own favorable way.

According to Dr. Satoru, China has consistently shown its assertiveness in the East Vietnam Sea, Taiwan and Japan issues, which is also to "collect cards" to play with the U.S. on the negotiating table.

Caught in the middle of U.S.-China competition, Vietnam continues to be a typical case of balancing interests.

When the "trigger" of the problem lies in trade, Vietnam also uses trade as an effective tool to counter.

At 2019 Vietnam Reform and Development Forum (ARDF), Dr. David Dollar, a senior fellow in the John L. Thornton China Center at the Brookings Institution, mentioned one of the solutions for Vietnam to achieve sustainable prosperity is to implement the provisions of the Comprehensive and Progressive Agreement for Trans-Pacific Partnership (CPTPP).

As new generation Free Trade Agreements (FTAs) such as CPTPP includes commitments on reform, laws, investment environment, labor, choosing this practice has long been supported by Vietnamese experts as a ‘two for one’ approach. It both helps Vietnam’s integration and facilitates institutional improvement for a long-term development.

But besides that, there are immediate, short-term benefits on paperwork surrounding these new generation FTAs. Vietnam - EU Free Trade Agreement (EVFTA) can be taken as an example.

But in addition, this is also a natural reaction of both Vietnam and the EU in the context of having to find each other to limit their dependence on the U.S.-China spiral, the two largest economies in the world.

Major U.S. trading partners are seeking to diversify their trade ties by accelerating negotiations with other countries in an effort to secure new markets for exports subject to – or threatened by – U.S. tariff hikes.

Above all, through EVFTA, observers in Vietnam are looking forward to cooperative partnerships in the field of defense - security.

In August, Prime Minister Nguyen Xuan Phuc met with the High Representative of the Union for Foreign Affairs and Security Policy, Federica Mogherini. The Prime Minister welcomed the progress in defense cooperation, and hoped that the two sides would soon sign Framework Participation Agreement (FPA).

FPA is an open mechanism for Vietnam to contribute to Europe's defense and security duties. Defense-security cooperation is also aimed at increasing trust and awareness, supporting the ASEAN-led security structure in the region... Vietnam's Ministry of Defense also supports the EU's ambition to join participate in the security and defense structures of Asia - Pacific.

EVFTA, besides clearing tariffs, has profound implications for geopolitics and defense for Vietnam.

In August, amid a Chinese group of Haiyang Dizhi 8 vessels violating Vietnam's sovereignty, the EU issued a statement emphasizing that unilateral actions during the past weeks in the East Vietnam Sea have resulted in mounting tensions and a deterioration of the maritime security environment which represents a serious threat to the peaceful economic development of the region.

In addition, the relationships between Vietnam and the United Kingdom, France and Germany are also doing well, and have become even better as the the countries issued a separate announcement to the EU about the East Vietnam Sea.

The same goes for CPTPP. In 2014, when the United States was a leading country in the TPP (former name), then U.S. Trade Representative Michael Froman emphasized that TPP is extremely important, not only for economic benefits, but also in terms of political geography.

Vietnam's success and its commitment to CPTPP and EVFTA are therefore a way to use commerce as a diplomatic and political spring.

He said: “Middle powers like Vietnam really need to be diplomatically nimble. Vietnam views trade agreements such as the TPP not just as engines of economic growth, but as ways to tie the prosperity of others to Vietnam’s security. This is so smart, and we see it with the recent trade agreement with the EU.”