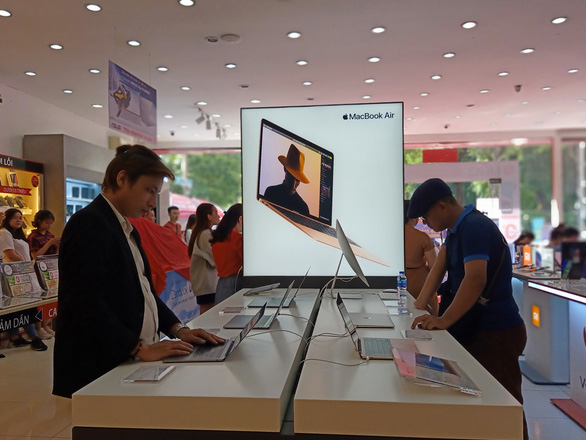 With Apple’s recruitment of a number of positions in Vietnam’s two biggest cities, rumor has it that the U.S. tech giant wants to open a plant in the Southeast Asian country.

On its official website, Apple is announcing 12 vacancies for hardware engineers, engineers and managers in operations and supply chain, managers in sales and business development, and managers in corporate functions in Hanoi and Ho Chi Minh City.

Under the job description for operations managers, Apple says it looks for those to help the company foster growth in the market, leading “a team of engineers in support of new product development as well as sustaining operations in ensuring the contract manufacturer readiness for very high volume production.”

The series of job openings has been posted over the past few months, fueling the rumor that the iPhone producer is fleshing out a plan to launch a production site in Vietnam.

Noticeably, the recruitments also include the position of a senior manager responsible for government affairs, prompting people to think that this could be a sign Apple is poised to establish a representative office in Hanoi.

Sharing with Tuoi Tre (Youth) newspaper his opinion on the conjecture, Dr. Le Hoai Quoc, former head of the Saigon Hi-Tech Park, said that it is “totally possible.”

According to Quoc, it is understandable for U.S. companies to want to shift production from China amid the two countries’ trade tension, adding that a number of Apple’s manufacturing partners already have plants in Vietnam.

For instance, Foxconn, a key supplier for the Cupertino-headquartered company, has a facility in the northern province of Bac Ninh to manufacture for the tech giant.

Meanwhile, Apple’s main assembly partner for AirPods, Inventec, on March 24 revealed it was preparing to establish a unit in Vietnam, Bloomberg reported.

In a recent move, Taipei-listed Wistron Corporation, another manufacturing partner, also chose Vietnam as part of its US$1 billlion expansion plan for this year and the next, according to Bloomberg.

Quoc said Vietnam has opened the door to investment from world-class companies, with South Korea’s Samsung being a prominent example.

However, several industry experts have begged to disagree.

In conversations with Tuoi Tre, the experts said that Apple has been posting job vacancies in Vietnam for years, not only in late 2019 and early 2020.

The opening of a production plant for a technology giant like Tim Cook's firm will require recruitments at a far “terribly larger” level than just the over ten positions that the U.S.-based company is posting, one expert said.

Another pundit, who refused to go by their name, emphasized that even if Apple really wants to move its production out of China, the movement will not happen soon as China is offering many preferential policies on land and costs, aside from being the world’s leading consumer market.

The experts agreed that Apple’s Vietnam recruitments are more likely to serve the opening of a small research center for distribution, sales, customer care or the participation in partners' production and testing.

In another opinion, Nguyen Van Toan, deputy chairman of Vietnam’s Association of Foreign Invested Enterprises (VAFIE), said that even if Apple has not yet set up its manufacturing plant in Vietnam, the increase in its recruitments and outsourcing to manufacturing sites here is a positive signal in itself.

It is considered one of the ‘Big Four’ technology companies, alongside Amazon, Google, and Microsoft.

Its worldwide annual revenue exceeded $260 billion for the 2019 fiscal year, according to the company’s statements.

Apple’s market share was estimated to slip to 12.6 percent in 2020’s first quarter from 13.5 percent in the last, according to Reuters.