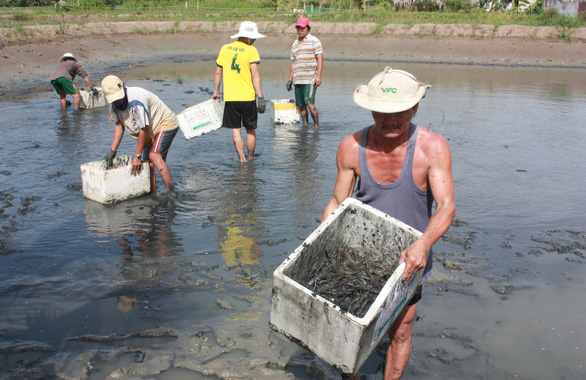 Vietnam’s agriculture ministry has urged authorities in provinces bordering China to take preventative measures against the spread of decapod iridescent virus 1, an emerging threat to the Vietnamese shrimp industry.

In a recent official letter, the Vietnamese Ministry of Agriculture and Rural Development cited the Network of Aquaculture Centers in Asia-Pacific as saying that the new virus has wreaked havoc on China’s shrimp industry in recent years.

The virus was first detected as early as 2014 from red claw crayfish, or Cherax quadricarinatus samples in the Chinese province of Fujian.

The disease has also occurred in farmed white leg shrimp Penaeus vannamei from Zhejiang Province and giant freshwater prawn Macrobrachium rosenbergii in some other Chinese provinces.

In February this year, the disease was reported to have affected about a quarter of the area for shrimp production in the Chinese province of Guangdong.

The Vietnamese agriculture ministry said the virus can infect all kinds of shrimp and has been observed to affect the Pacific white shrimp, crayfish, and giant freshwater prawn.

However, the disease has yet to be detected in Vietnam, according to the ministry.

For the sake of disease prevention and control, the ministry suggested the National Steering Committee against Smuggling, Trade Fraud and Counterfeit Goods instruct its grassroots units in those provinces bordering China to take measures against the illegal import, transport, and sale of shrimp seeds, prawns, and fresh feed for seafood.

Violators will be subject to stiff penalties, said the ministry.

Provincial authorities, police officers, border guards, and market surveillance officials are expected to join the efforts against the spread of the shrimp disease.

Vietnam’s shrimp exports logged a mere 1.8 percent year-on-year rise to US$628.6 million in the first three months of this year, according to the Vietnam Association of Seafood Exporters and Producers.

China, Japan, and the United States were the three major consumers of Vietnamese shrimp products in the first quarter.

Vietnamese shrimp shipments to the United States grew 18.2 percent year on year to $115.5 million, amid disruptions as a result of the novel coronavirus disease (COVID-19) pandemic.