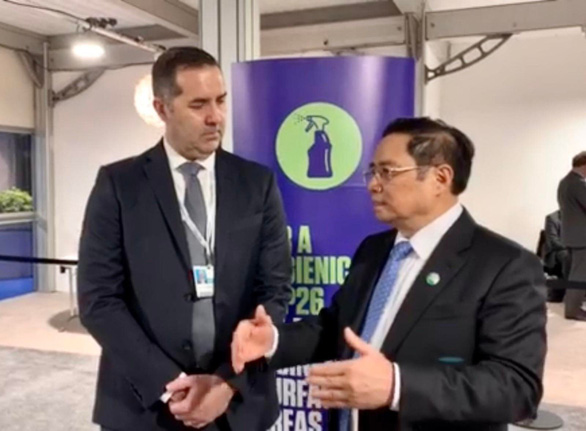 Kinder met PM Chinh on the sidelines of the 26th United Nations Climate Change Conference of the Parties (COP26), which is taking place from October 31 to November 12.

The CSO informed the prime minister that approximately 200 Nike factories in various localities have resumed production following a hiatus about six months ago because of the prolonged COVID-19 outbreak.

He thanked the Vietnamese government, its ministries, agencies, and local authorities for their timely support for businesses in combating COVID-19 and restoring production.

Nike will continue to expand investment and production in Vietnam, the Nike representative stated.

Last month, Vietnamese officials hit back at rumors that Nike had planned to move production out of Vietnam.

Although Nike does not own a factory in Vietnam, the firm is working with 200 suppliers in the Southeast Asian country.

The American sports giant has moved a number of orders to other countries, but it was not moving production out of Vietnam, according to the Vietnam Leather, Footwear and Handbag Association (LEFASO).

The Industry Agency under the Ministry of Industry and Trade echoed LEFASO’s rejection, recalling a recent meeting between the Vietnamese prime minister and foreign direct investment (FDI) businesses, during which Nike affirmed that it would not leave Vietnam.

The first nine months of 2021 saw the Vietnamese footwear industry rake in US$13.33 billion from exports, a year-on-year rise of 9.8 percent, according to the trade ministry’s statistics.

Vietnam has found 932,357 infections since the COVID-19 pandemic first hit it early last year and 927,494 community transmissions in 62 out of its 63 provinces and cities since the fourth virus wave erupted.

More than 25 million people of the 98 million population in the Southeast Asian country have been fully inoculated against the coronavirus.

The national government has relaxed pandemic control curbs over the past few weeks as transmissions have slowed down, due in part to larger vaccine coverage.