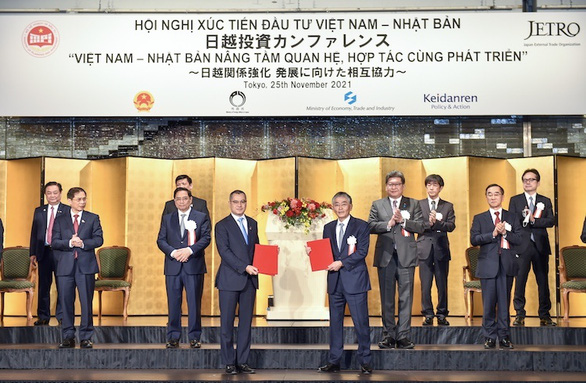 More than 40 cooperation agreements were signed between Vietnamese agencies and enterprises and their Japanese partners at the Vietnam - Japan Investment Promotion Conference held on Thursday and attended by visiting Vietnamese Prime Minister Pham Minh Chinh.

As part of his four-day official visit to Japan, starting on Monday, at the invitation of his Japanese counterpart Fumio Kishida, PM Chinh was present at the conference and witnessed the signing and exchange of over 40 agreements in Tokyo on Thursday morning, the Vietnam News Agency reported.

The total value of these agreements surpasses US$3 billion, involving many Japanese business giants such as Mitsubishi, Sojitz, Aeon, Sumitomo, and others, according to VnExpress.

Among the prominent deals is the one between Japan’s Mitsubishi and Marubeni and Vietnam’s Power Generation Joint Stock Corporation 3 to build the Long Son 1 power plant project in Ba Ria - Vung Tau Province at a cost of $1.75 billion.

Another is the $500 million agreement for a project on raising, processing, and distributing beef cattle in Tam Dao District, Vinh Phuc Province between Sojitz Corporation and Vilico Vietnam Livestock Corporation JSC under Vietnam’s Vinamilk.

Sojitz also signed some other deals worth hundreds of millions of U.S. dollars.

Aeon Mall, a leading Japanese retail group, clinched deals to invest in two facilities of Aeon Mall Vietnam in Thanh Hoa Province and Hue City, with a committed investment of $170 million in each locality.

Addressing the conference, PM Chinh said he had had a very successful meeting with PM Fumio Kishida and the two sides had agreed to issue a joint statement to open a new era in their countries' bilateral extensive strategic partnership for peace and prosperity in Asia.

The joint statement affirms that the relationship between Vietnam and Japan is at its best level ever, and serves as a good environment for promoting multifaceted ties between the two countries, including economic development cooperation, the PM said.

The Vietnamese government’s leader highly appreciated Japanese businesses for their support for Vietnam in the fight against the COVID-19 epidemic.

The prime minister thanked Japanese enterprises for their trust in Vietnam’s business environment, which is operated on the principle of ‘harmonizing interests and sharing risks.’

As a country with a stable political environment, protected human security, and hardworking and smart workforces, Vietnam can make foreign investors feel secured when making large and long-term investment in the country, PM Chinh said.

The Vietnamese government chief also acknowledged that Vietnam, like many other countries, is facing global problems such as epidemics, climate change, population aging, and environmental pollution, which should be addressed by global approaches.

The premier called on Japanese businesses to support and share experience with Vietnam in institutional building, human resource training, green finance for investment for development, science and technology, and corporate governance at all levels.

The Vietnamese government is committed to creating the most favorable conditions for investors to do stable, long-term, and effective business in Vietnam, PM Chinh said.

The head of government expressed his hope that he would see a stronger investment flow from Japan to Vietnam in the coming time.

The conference was attended by the ministers and high-ranking officers from various ministries of Vietnam, as well as leaders of many Vietnamese cities and provinces.

On the Japanese side, the Minister of Economy, Trade and Industry, the president of the Japan External Trade Organization, and representatives from a large number of Japanese businesses took part in the event.

Japan, which has established diplomatic relations with Vietnam since 1973, is the second-largest investor, the fourth-largest trade partner, and the biggest official development assistance (ODA) provider of the Southeast Asian country.