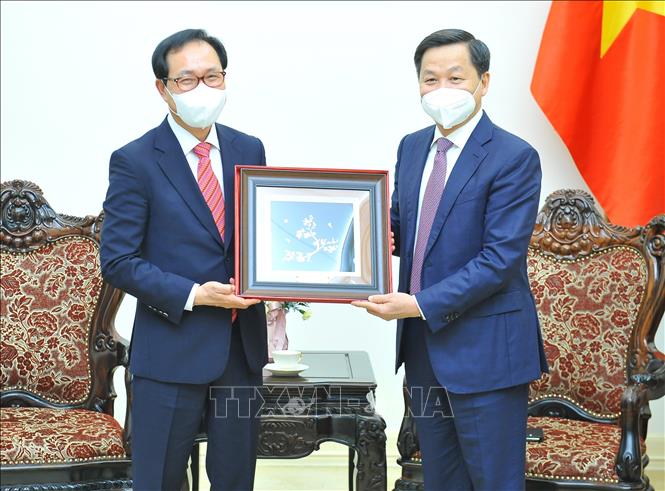 Deputy Prime Minister Khai made the statement at a meeting with Samsung Vietnam Complex General Director Choi Joo Ho in Hanoi on Monday, according to the Vietnam News Agency.

The official informed Choi of his upcoming official visit to South Korea under the dialogue mechanism on economic cooperation at the deputy prime minister level.

As Samsung is a major investor in Vietnam, the Vietnamese government wants to listen to its opinions related to its operations in the country to form a basis for discussions with South Korean leaders during the next visit, Khai said.

Samsung currently has eight facilities in Vietnam, including six manufacturing plants, one R&D center, and one sales entity, the Samsung executive said.

After weathering the severe fourth wave of COVID-19 in Vietnam, during which operations of Samsung facilities in southern Vietnam could only operate at 40 percent of their normal capacities, Samsung Vietnam Complex has restored its production in northern Vietnam since August and in the southern region three months later, given the support from Vietnamese authorities at all levels, Choi told the host.

The Samsung executive thanked the Vietnamese government for its assistance that contributed to Samsung Vietnam Complex’s revenue of $56.5 billion in 2020.

This year's revenue is expected to be 15 percent higher than last year's, he added.

Choi expressed his wish that the Vietnamese government continue to maintain a safe and flexible adaptation mechanism to both effectively control the COVID-19 epidemic and ensure uninterrupted production.

The Samsung Vietnam Complex leader put forward some suggestions related to the global minimum corporate tax as prescribed by the Organization for Economic Cooperation and Development (OECD).

Deputy PM Khai told the South Korean entrepreneur that the COVID-19 epidemic has had a great impact on Vietnam, especially in the previous time when Vietnam had to apply strict COVID-19 social distancing measures due to slower access to vaccine supplies than other countries.

Recently, the Vietnamese government, with better vaccine supplies, has eased restrictions and reopened its economy with the strategy of living safely with the coronavirus.

Khai affirmed his government will continue creating favorable conditions for businesses while continuing to combat the pandemic.

Referring to the appearance of the Omicron variant, the Vietnamese official said Vietnam will take measures to cope with it.

He also called on large enterprises, such as Samsung, to cooperate with local authorities in fighting the pandemic and ensuring business efficiency.

He expressed his appreciation of Samsung’s investment projects in Vietnam, especially the ongoing project to build an R&D center at a cost of $220 million in Hanoi.

Around 2,000 engineers in mobile software and 5G networks are working at the center, which is expected to be completed in 2022, when it will attract a larger workforce.

He encouraged foreign businesses to give feedback and recommendations to any changes to the Vietnamese government's relevant policies and regulations to ensure harmonization of legitimate interests of foreign investors as well as the state of Vietnam.