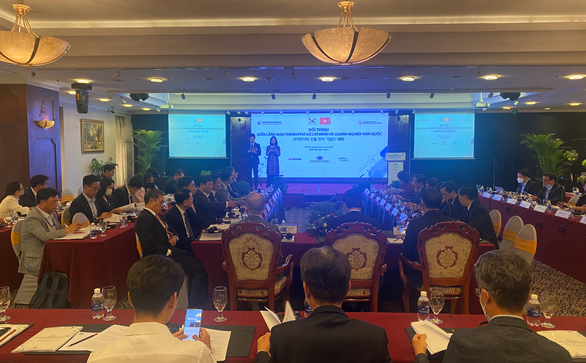 The president of the Korean Chamber of Commerce in Vietnam (KOCHAM) has asked the Ho Chi Minh City government to assist South Korean enterprises in alleviating their cost burden in the current difficult period.

KOCHAM President Shon Young Il made the request at a dialogue session between the city government and South Korean enterprises, held on Friday by local authorities in coordination with the Consulate General of South Korea in the southern metropolis.

Speaking at the event, chaired by the municipal People’s Committee chairman Phan Van Mai, the KOCHAM leader said Korean businesses are facing a lot of pressure while trying to recover from the COVID-19 pandemic and cope with impacts caused by the ongoing Russian-Ukraine military conflict and the inflation risk.

Therefore, he hopes that the Ho Chi Minh City administration can support Korean businesses in reducing their cost burden in this tough period.

Representatives of many Korean businesses, such as CJ Group, GS E&C Group, and KCTC Logistics, also told the dialogue session about difficulties, including operating cost and legal issues, facing them while operating in Vietnam.

Addressing the event, chairman Mai emphasized that South Korea is among the important economic partners of Vietnam and that the South Korean businesses have greatly contributed to the economic development of Ho Chi Minh City in particular and Vietnam in general.

The pandemic has had many heavy impacts on business operations, including those from South Korean companies, so this dialogue was held for both local authorities and South Korean entrepreneurs to listen to challenges facing them and seek remedial measures, the city leader said.

Leaders of agencies concerned answered the questions raised by Korean businesses and at the same time received opinions and suggestions from them to seek appropriate solutions for their problems.

According to a report from the Korea Trade and Investment Promotion Agency (KOTRA), Vietnam has become the Southeast Asian country that attracts the most investment from Korean businesses in manufacturing industries.

Over the past ten years, South Korea’s investment in manufacturing in Vietnam has reached around US$23 billion, much higher than $16.8 billion in Singapore and $9 billion in Indonesia, according to the report.

Particularly in the last five years, 60 percent of South Korea’s investment in Vietnam was poured into industrial production.

After South Korean conglomerates such as Samsung and Posco entered Vietnam, more and more partners of these giants have followed them.