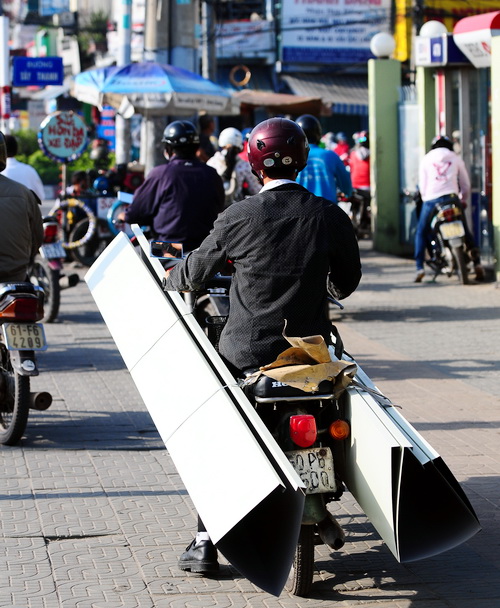 Editor's Note: An Australian expat, who has been living and working in Vietnam for more than ten years and wants to be anonymous, filed this story complaining that Vietnamese are stuck in so-called “Tunnel Vision,” which only allows them to see what is directly in front of them, not anything behind or next to them. The opinions expressed here are the author’s.

Consider that you are on the street, you are driving your motorbike, and the person next to you or slightly in front of you just decides to turn or just pulls out blindly from a side alley and almost hits you. Or while exiting a building, the person in front of you opens the door just enough to allow themselves through but neglects to hold the door open for the person behind them. Let’s even consider a decision made in haste, with the only factors taken into consideration are those directly in front of the decision maker, without considering the past, or what other people think.

Have you ever experienced any of these things – here in Vietnam?

To probably explain this let’s go back to my first example about the motorbike, since it’s a perfect metaphor for what’s going on here in Vietnam. Many bikes in Vietnam have no mirrors to see what’s going on around them, or if they do, they are often not used - or if they are - then they are used by the rider to see how good they look when they ride (or perfect for squeezing pimples, shaving, or finding gray hairs). The same could be said about Vietnamese mentality in public areas.

What seems evident is that Vietnamese people often don’t care enough about the people around them – especially the ones they don’t know. Now, I’m not talking about the obvious people who need help in their daily lives (eg. disabled people, old people, and the sick) because I think Vietnamese people are very charitable and helpful to those in need. No, I’m talking generally about interactions of the Vietnamese public.

Many Vietnamese often complain that the reason that people do things like cutting off people while riding their bikes, or cutting in line, or pushing and shoving to arrive first is because they have no shame. Some say it’s because of their lack of education, but maybe it’s more to do with a lack of awareness or care about how it makes other people feel. Others say that there are just not enough boundaries and effective punishments in society. To go back to the motorbike metaphor, if the bike can go there, then we should go there since if we don’t, someone else will, and thus get ahead of us in the “rat race.”

One Vietnamese person told me that she is often disgusted by those who break these social rules, but when the time suits her, she will also break the very same rules because she’s in a hurry. And sometimes, I find myself doing the same thing.

I don’t think it’s because people just don’t care. But maybe it’s because they have “Tunnel Vision” – which only allows them to see what’s directly in front of them (and nothing beside or behind). Maybe this is a product of the past – the war, the food lines, and the painstaking rebuilding of a nation – or maybe it’s something more personal: the feeling of being left behind in an increasingly fast-paced world.

Now, I’m not saying that it’s much better in the West; everyone can be selfish at times. But at least on the roads we have something called “GIVE WAY” to the left or right and have some order on the roads instead of “GIVE WAY-to-those-with-more-determination-to-pass” or “GIVE WAY-to-everything-bigger-and-faster-than-you”! And in public, foreigners are generally polite and courteous to those around us – especially if people show it first.

So maybe the public just needs to consider their actions more, and also denounce the anti-social behaviors that have led to this situation. In Western countries, we have amusing TV campaigns, contemporary pop and rock songs, and creative slogans to help build the idea that positive social behavior is “cool,” rather than simply banners or posters.

Or could the many cinemas with their lists of do’s and don’ts, or shopping centers and fast food joints with their orderly queues and set prices, be responsible for training people to behave socially as they spend and eat and enjoy?

Or is it just a matter of time, waiting for the next generation to mature and lead their children by example?

Some Vietnamese people say they don’t know, as they push into the queue, as they are generally not polite to others, and as they continue to drive on the footpath to avoid a traffic jam or red light. You might even see me up there sometimes…

Maybe people here just need to find a cure for their “Tunnel Vision.”