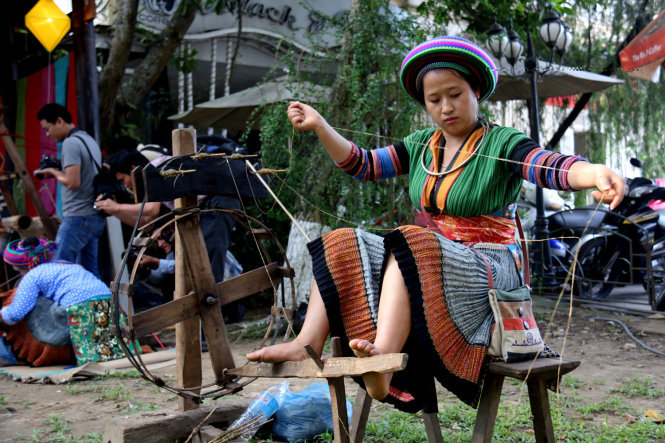 Vietnamese souvenirs will be rich in regional characteristics in 2035

Editor’s note: D.T., 25, hopes Vietnam’s tourism appeal will be boosted by a wide array of alluring handicraft keepsakes in 2035 in his submission to the “Ky Vong Viet Nam 20 Nam Toi” (“My Expectations for Vietnam in 20 Years”) writing contest.

However, these items lack diversity, while more products available on the market come from places other than Vietnam. This has left tourists, particularly foreigners, with limited choices.

I aspire that in the next 20 years, Vietnamese keepsakes would be diverse in form, high in quality and rich in different regions’ cultural and historical values.

Items from provinces and cities across the country would no longer repeat or overlap themselves. For instance, visitors to Ben Tre Province are supposed to buy handicraft items made from coconuts, which abound in the province. In addition, design changes and quality improvement should be ensured so as not to lose appeal among repeat visitors.

I expect that in the 20 years to come, international holidaymakers would spend over half of their expenditure on shopping, instead of the current 10-15 percent. The fine arts and handicrafts industry would thrive and spur a revival of traditional craft villages.

Then we would be able to combine shopping with tours to craft villages which guarantee tourists tasteful, affordable items.

I anticipate that in the next two decades, products closely associated with Vietnam and its people, such as bamboo, earth, straw and water hyacinth, would be turned by ingenious craftsmen into highly aesthetic, enduring souvenirs. Vietnam would then fully tap into and get rich on its own resources.

Rural people throughout the Mekong Delta would mix straw, ash and earth in a certain proportion as a construction material. I think the material could be adopted to build small houses typical of the countryside. Such houses could be preserved properly to enhance their endurance and mobility.

Ho Chi Minh City has yet to boast distinctive mementoes. In my opinion, miniature models of the city’s architectural icons, including the Saigon Notre-Dame Basilica and the Saigon Central Post Office, should be crafted. Items which highlight both the city’s past and contemporary urban life should also be introduced. The objects should feature the Saigon Prison during the French colonial period on one side and the current General Science Library on the other, for example. This will serve as a highly effective channel to promote the city’s historical values.

Firstly, it’s advisable that international tourists’ needs and habits in shopping for souvenirs be surveyed.

Secondly, based on the survey findings, provinces’ and cities’ tourism authorities should take into consideration their locales’ strengths and cultural identity to craft appropriate products. For instance, to promote the touristy delight of Tien Giang Province, known for its Cai Be Floating Market and bountiful fruit reserves, it’s recommended that mementoes bear the image of a girl in “ao ba ba” (traditional pyjamas) rowing a boat laden with fruit in the Mekong Delta. Surveys should also be carried out on localities’ specialties and raw materials which can be harnessed for souvenirs.

Thirdly, it’s advisable that chains of souvenir supply stores be set up at key tourist attractions. These shops would only sell the localities’ mementoes and are not allowed to display items from other countries. The shops should feature the same hallmark color and design in each city and province, with shop assistants wearing appropriate uniforms and selling items at fixed prices.

Fourthly, measures should be implemented to ensure outlets for handicraft specialties. Artisans should also be entitled to incentive policies.

Fifthly, it’s essential that festivals featuring localities’ cultural traits be organized every year. If such festivals cannot be held on a regular basis, folk games should be offered and souvenirs be alternated to avoid boredom among tourists.

Sixthly, it’s recommended that suitable models be adopted and spread, while inappropriate items should be removed from markets and shops.

Seventhly, efforts should be made to promote Vietnamese handicraft products, culture and history to boost the country’s allure.

In my opinion, such solutions should be adopted on a pilot basis in a certain locality. Experience will then be drawn on before the model is multiplied in other places.

If harnessed effectively, souvenirs will become an ideal tourism promotion channel. Vietnam will then become a promising destination if the tourist industry can fully leverage the rich potential of a picturesque country which also has a wide range of constantly updated, beguiling mementoes.