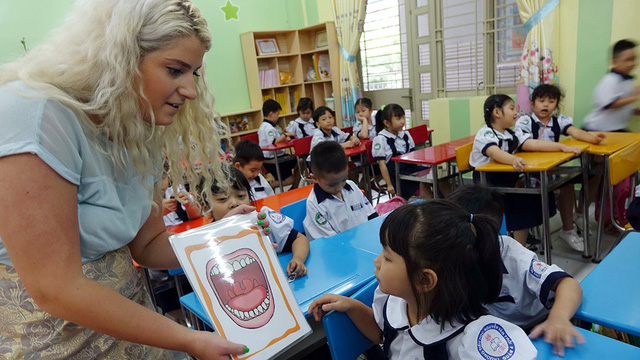 Editor's note: Michael Dolan comes from Ireland. He is working in Ho Chi Minh City. He will join us as a contributor from now on.

It’s a normal Monday afternoon in London. Midday sun is blistering and Embankment park is teeming with locals, workers and tourists as boats shuttle people up and down the Thames. This is the busiest time of year for English schools in the city. One Spaniard, three Italian girls, one young Swiss boy and two teenagers from Turkey and Saudi Arabia complete a reading task as I look out the 4th floor window onto Buckingham Street. Mine is the biggest English class in a declining school. The class will stay open another month. I am one of the lucky teachers.

It’s now two years later around the same of day but a different window. I am 5 storeys high looking onto a different river, in a different city, to a different scene. My phone rings out and buzzes across a glass beige coffee table. It’s my school calling here in Ho Chi Minh City. There are too many classes and not enough teachers. My schedule is already packed. I ignore the call. I am one of the lucky teachers.

I have been teaching for about 7 to 8 years on and off. I have only done this in two cities, London and now Ho Chi Minh City. When I started teaching in London, it was the golden era of the EFL industry. Classes were bursting with students from all over the world. It was a time of excitement and discovery.

Being a young Irish country boy, I had travelled to Southeast Asia but never had this much exposure to so many nationalities and it was exhilarating. During the first years, I learnt a lot about different countries and the EFL craft. London was the place to be and you could feel it.

Central London was always a commotion to inhabitants from every corner of the globe. Parks were invaded at lunchtime and retaken in the evening. Boroughs that were once no-go areas started to sprout art, subgenre music and hipster alternative food. Sky-rises shot up along the riverbank. Underground trains were packed like Ryanair carry-on luggage and the time of the cyclist was hitting its peak.

Then the reform of the student visa came. It started off lightly. Working hours were reduced for students only studying English. Then the working hours were only entitled to third-level institutions with phenomenally high tuition fees. Oxford Street, once a watering hole for English schools, was now an elephant graveyard of empty classrooms.

Teachers could once walk along the street and stumble into a school and find work the next day, after it was a ratio of 50 CVs to one or two replies. The introduction of the zero contract was the real nail in the coffin. Inflation and uncontrolled increase in rent and power meant that the average Londoner was living with both hands clasped tightly on a belt trying to make either end meet.

And with a government that was bolstering big businesses and accommodating their needs before those whom they employed, many gave in and let go of the belt. No longer able to justify the amazing cultural haven that is London as a logical place to live economically. London didn’t seem so bright anymore. Many of my friends started to emigrate. Many schools I worked in closed.

I was lucky enough. I had managed to teach part-time and was left a position in small-time property management for a private landlord. Once I started cycling, abstaining from alcohol and giving up cigarettes I survived relatively okay.

Eventually I found work in a school that allegedly sold a superior product to wealthy students who believed the sales pitch. There were amazing teachers there, but no more amazing than some of the other teachers I have worked with in other schools. I worked there for around 2 and half years and had some great times and met some real amazing people, yet the zero contract and insecurity of any stability eventually seeped through my husk and broke me down. It was then my father suggested a trip together. To Vietnam.

After immediately falling in love with Ho Chi Minh City and the culture, I got onto tefl.com and started looking for positions in this city. The list was endless and many schools were offering very good salaries and, of course, contracts.

Scrolling through the different companies and then listings of available rooms to rent for a fraction of the cost in London, I was instantly sold. I quickly secured a position with a very well established company in Vietnam.

From the get-go, they were nothing but helpful and friendly and guided me through everything that I needed to do. New staff were even offered free accommodation for the first ten days. Having been around the block of EFL schools in London, I was immediately impressed with this type of professionalism. Insofar as companies go, the school in which I work for is not perfect, but it is fairly decent.

The wage in relation to cost of living in Ho Chi Minh City is superb. No complaints on my part and I really cannot abide those who do complain. I know what it is like to work in this industry on the breadline. The classrooms are usually full and the direct management are really supportive and active in their approach to developing teachers.

It is a private industry so capitalism is always going to be part of the system but in comparison to London, the monetary-guided decision-making from above does impede but not as severely as that back in the English city, where continually the executive decisions were made to classes not only to save money, but to save a dying animal.

Living in such rash and impetus environments were treacherous on the teacher who never knew their fate from one month to the next. So life here of course is more relaxed. And my standard of living has of course increased and the company I work for of course has enough customers to thrive.

Of course I feel lucky to be afforded not only a better life but more time. Time I can do other things with. Fulfilling things for myself, friends and the community I am now excited to be apart of. I am 5 storeys high looking onto a different river, in a different city, to a different scene. I am one of the lucky ones.

Laugh all you want, but I honestly put the banh mi sandwich right at the top of the list