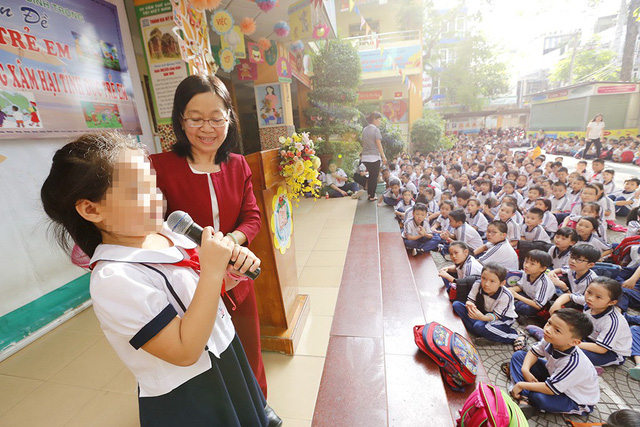 Child sexual abuse is an ongoing and serious issue that not only Vietnam but also other countries are confronted with.

Some expats provide Vietnamese with advice on how to deal with the problem.

Educate children about private parts as soon as they talk

Child sexual abuse victims are left with emotional scars that will never leave.

It changes the child to someone else that you hardly recognize as far as how they interact with their parents before and after becoming a victim of sexual abuse, although some help can come from psychiatric care.

Hence, children should be told as soon as they can talk and understand that no one should touch their private parts.

Later when they get to five or six years old parents’ best option is to teach children to trust their instincts and how to handle situations that make them feel uncomfortable – like what you do if you are at a friend’s house and someone there tries to touch you, or show you inappropriate material – and then role-play the situation with your child.

This is very important as it makes them alert to a real situation if it occurs.

I told my two-year-old sons and grandchildren about their private parts belonging to them and no one else should touch them.

Later we talk about not letting them get into a situation that they can’t talk to me about.

This is always very important that they know they are never alone with whatever happens to them and they should never fear telling their parents or guardians.

The signs of abuse aren’t always obvious, and learning the warning signs of child abuse could be life-saving.

You might notice behavioral or physical changes that could signal a child is being abused: behavioral changes such as removing themselves away from any physical contact, even from a trusted relative; regressive behaviors like thumb sucking from younger children or changing hygiene routines such as refusing to bathe or bathing excessively, among many others.

It is important to encourage children to communicate with parents.

This process starts at a very young age and is repeated often while growing up.

They are taught to say “no” with conviction, so they never become a victim.

School educators should be taught to recognize abuse of children.

When they see it, then the parents should be notified right away as well as police and authorities.

In the States, child abuse is mostly taught in school starting about age six or first grade.

As strange as it seems, most parents let the schools talk about and teach this subject as they seem to not have the time or don’t know how to tell their children what they should recognize when they are being abused.

Sex education is also taught in school and not at home.

Charlie Oakes from the U.S.

Sometimes parents do not communicate enough with their child

In my country, the UK, we are constantly discovering the huge scale of the problem of child sexual abuse in our institutions, such as media organizations, religious institutions, schools, and other places.

The sad truth is that if there are any situations where people can be in a position of power over children and young people, then there will always be really sick and confused people who seek out those positions and abuse that power.

Obviously all organizations that deal with children and vulnerable people need strict rules and procedures to do everything they can to prevent this from happening.

I think we all think if we were parents then we would be able to prevent our children from being abused: but the truth is a lot of parents fail in this regard.

Sometimes children don't feel able to tell their parents about abuse, sometimes parents don't communicate enough with their child, or don't pay enough attention to realize that they are suffering.

They also fail in their duty to teach children how they should and shouldn't be treated by adults.

Schools are places where change can happen much faster.

Although teachers might be inexperienced or uncomfortable discussing sexual abuse with students, it is important and could spare a lot of suffering and save lives.

Of course this doesn't remove the responsibility of the parents to communicate properly with their children, but it could give children the knowledge and courage to report sexual abuse and remove abusers from positions of power.

Joe Edwards from the UK

Raise awareness for the parents

The biggest problem in Vietnam in this matter is that there is no sex education.

While Canadian schools start educating children about this matter at 11 years old, Vietnamese students are not provided with this knowledge until they are finishing junior high school, or in high school, if not being skipped.

Only by understanding how it works, what is love, protection, and sickness, can we know what aggression is.

It is also important to note that both parents and schools have the responsibility to educate children about this matter.

However, since the government does not provide proper education, in most Vietnamese family cases, even parents have not been educated or had a proper understanding of the matter.

I am not saying that Canada does not have such problems, because we do and they happen everywhere.

The impact on children is indescribable as it can destroy a personality forever.

While the definition of sexual assault is whatever you do not like, it is harder in Vietnamese culture.

Vietnamese never say no, they tend to say yes or avoid the confrontation which is why it is even harder to put a molester in jail.

Another problem is that there is still a lot of poverty in rural areas so not many children go to school, which makes it difficult to change people’s mindsets, raise awareness, and spread the understanding.

For the time being, the government can raise awareness through public media such as TV, newspapers, or radio.

Vietnamese seem to like famous people so the government can take advantage of it and have well-known figures talk about such matters on TV.

In my opinion, the impacts on a child who has suffered “sexual abuse” are varied. The child may feel a sense of guilt and carry that guilt with them throughout their life. They may even become abusers themselves as they get older. They may find themselves addicted to alcohol, drugs or display other addictive behavior. Often the denial and hiding of the issues is the biggest burden the child has to carry. I would also like to mention shame and self-loathing among child victims as the impacts.

In the West, we often warn children, “never take candy from strangers," but since sexual abusers are often people in trusted positions of power over the children, this advice is not very helpful. The most important thing is that a child feels that he/she can share anything with his or her parents. If there is that level of trust, then the parents will know when something is wrong. Children should be told that it is not ok for an adult to touch them or fondle them and if the child feels uncomfortable with a particular young person or adult, they should share that information with the parents or other responsible adults.

Children should be educated that as soon as they are able to understand language. They should be taught and re-taught at their age level, that it is not ok for an adult to touch them in their private places, or to kiss or fondle them. Parents should also teach their children it’s not ok if a person who molests children tells them that it is a secret just between the two of them, and makes children promise not to tell anyone about what happened.

Parents should be alert to the behavior of their children and of the young people and adults they come into contact with. If an adult shows more than a healthy interest in the child, singles them out for extra attention, buys them presents, and suggests special outings, it would be good to talk to the child about their relationship with that adult.

The most important thing is “information.” Your child needs enough information to clearly be able to judge what behavior is appropriate and what is not. Free communication with parents and others in a position of trust is very important.

That’s not only the family’s responsibility; schools must be very alert and check carefully the references of all the people that the child comes into contact with; not just the teachers, but all the staff.

L. Dennis Woolbright from the U.S.

Parents should not blame the children

It is important to keep communication open between parents and children. Many parents do not know how to talk about this since it is very uncomfortable. Often by the time parents say something, if they ever do, it is too late because sexual abuse can begin at an early age. Basically, parents should tell their children that their bodies are theirs, they are not for anyone else to touch.

Children as young as five years old should be taught that and this message should be repeated during their lifetime.

Since much of the abuse is caused by friends, it is almost impossible to protect one's children all the time. Changes in a child's behavior should be noted and gently questioned in the hope of curtailing abuse if it does happen. Abuse is very bad but abuse which continues for a long time can be utterly devastating.

Parents must understand the children are the weakest people in this scenario. Abuse is only rarely committed by someone younger than the victim. So the guilty person is almost always older and theoretically more mature. The children are almost powerless and can be used and manipulated. So, parents should not blame the children if the abuse is discovered. Parents should try not to judge the child.

Also, schools should have an effective sex education program for students and staff.