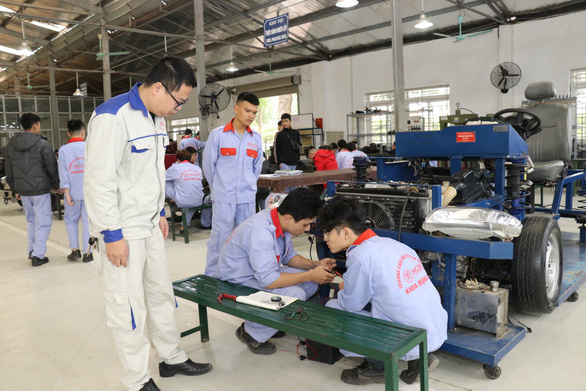 Labor Day occurs on May 1, straight after Reunification Day so the double national celebration becomes an even greater moment of national pride.

A significant percentage of the population use the twin holidays to return to hometowns or just vacation.

Trade union groups and youth groups are among those often contributing their time to do volunteer work with socially and economically disadvantaged groups.

Nowadays, two of the largest groups, the Vietnam Women’s Union and the Vietnam Farmers’ Association, led many of the parades to celebrate Labor Day before COVID-19, as well as working in the background throughout the year on improving labor laws, legal protection for workers, and lifting salaries and workplace conditions for hundreds of thousands across the country.

Labor Day highlights and promotes the dreams, hopes, and ambitions of working-class people – their struggles for equity in the workplace, peace, and social progress.

The shame of it all was social progress were delayed for decades as the Vietnamese had to fight the French and Americans before true independence and reunification made it possible to deal with economic issues and the problems of workers.

The Vietnamese government has always seen worker welfare as a core part of its philosophy.

In the years since 1986, when the nation began to shift from a purely central government to one that included many free market reforms, this has also included major changes to labor laws.

Some of the changes are worker’s rights and entitlements such as paid leave, maternity leave, and methods of resolving workplace disputes.

Called ‘Doi Moi’ (Renovation), the shift’s aim is to mix government planning with incentives to promote business outside of the state-run enterprises and it has been a spectacular success.

Still, there’s so much work to be done.

Vietnam’s educational push to elevate the population’s ability to gain a better income and become more productive is still struggling although it is nowhere as badly as surrounding countries such as Laos, Cambodia or Myanmar.

The industrial workforce will need to adapt to increasing automation, particularly in textiles, food processing, and manufacturing.

The average salary for rural and factory workers hasn’t increased that much compared to the money filling company accounts.

The coronavirus has hit the workforce hard with millions still trying to get back into employment.

And this includes the difficulties of creating meaningful work for the nation’s six million disabled and handicapped population.

Be that as it may, things are always getting better in the strange ‘time frame’ that the Vietnamese have; some things done blinding quickly, other issues taking years to gain attention and resolution. Gender equity in the workforce is going slowly with still too few women in senior and influential positions, which would be one example.

Last year, a new labor code was agreed in November with much of it now active as of January 1, 2021.

It raised the age for retirement and the new code will also allow small non-government trade unions to operate in particular industries.

Some of this has changed to comply with international trade agreements, especially one with the European Union, which could put the question of wages in private negotiations.

I guess time will tell how much of the salary question is dealt with effectively.

There’s also a movement to extend some legal protection to self-employed and freelance workers in the code, whereas contracts are redefined as part of that adjustment so workers can argue for enforcement of their contracts.

In any case, it’s still all about us workers, whoever we are.

COVID-19 is changing the way we do business and how we function within our social worlds.

I think ‘solidarity’ is probably more important than it has ever been in the last few decades.

So celebrate this day and remember we’re all in it together!