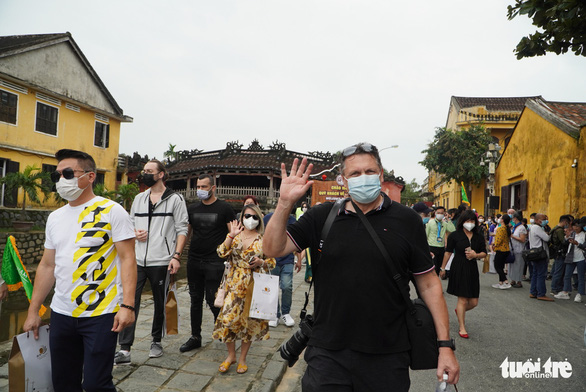 So how good is it to be back? You know that feeling when you finally collapse on the sofa after a long journey. It’s like that.

I’m back in Vietnam after six months abroad. I had to leave because I’d had too many visa extensions so I needed to wait until the visa situation in Vietnam became clearer. Finally with the new e-visa option at least I’m able to stay for about 30 days at a time.

So the plan is to do the 30-day thing until I can put together a business. It’s an expensive option but that’s life and the only real (legal) option I’ve got.

Previously, I’d lived in Vietnam for nearly 14 years so it was intriguing to witness post-COVID recovery within the country. I’ve always been based in Hoi An, on the central coast, a well-known tourist destination that underwent dramatic changes when the coronavirus hit the nation.

When I left seven months ago, things were as quiet as a mouse and Hoi An resembled something of a ghost town. With foreigners leaving and locals out of work, it was a tough time all around. But now it’s bouncing back.

It’s worth noting how well the Vietnamese have coped over these last two years and they’re now getting back to business even though COVID-19 still looms overhead as a reminder of how fragile our societies can become.

It’s wonderful to catch up with old friends, particularly the Vietnamese whose lives have been so disrupted yet they still managed to move forward from job to job and idea to idea. Nothing is too difficult for them to take on. Plenty of shopkeepers here became construction workers and hotel managers turned into retail and real estate agents.

And it’s a busy time to return!

I’m writing this about one week out from Vietnam’s National Day, always celebrated on September 2. The day marks Vietnam's declaration of independence from France in 1945. This may mean lots of parades and ceremonies to mark the occasion across the country this year. For the locals, this will run over a four-day holiday coming just after the school holidays have finished so the travel chaos will continue for a few more weeks.

In early October, Vietnam will observe the Mid-Autumn Festival, a cross between Halloween and a regular fest mainly for children. Already I’ve seen dozens of parents creating parking chaos in front of the toy shops as festival drums and costumes are purchased.

Stepping back into my familiar world has been tricky but more than worth it. Every morning I read the world news and just shake my head in bewilderment at the problems besetting people, particularly in developed countries – from energy supplies to food, from damaged economies to going broke.

During my time in Sri Lanka waiting to come back to Vietnam, I experienced first-hand what the locals suffered: food and fuel queues, no power for hours on end every day – no hot water, no cup of tea, no air conditioning – the list went on.

So my major and surprising reaction at being back was to think, ‘Ah, I’m back somewhere normal,’ not my usual reaction to life in Vietnam.

Every day back here, I’ve half expected the power to suddenly fail. But everything’s working and pretty well too.

In many ways, either as an expat or local, we are very well off here compared to the social and economic crisis erupting all over the place. A friend recently back from Australia told me of paying nearly seventy dollars for a pizza. Another friend’s parents back in England are looking at unbelievable energy costs as they head into winter.

But Vietnam? Roaring. The state’s economic predictions for next year will put Vietnam among the few nations in the world growing healthily. Around Hoi An, it’s busy – lots of domestic and foreign tours so the buses, taxis, and restaurants are making money. It’s not as good as before but everyone knows recovery will take some major changes in how Vietnam treats tourism. By that I mean longer visas for tourists and easier visas for business people and other professionals.

I think Vietnam is dragging its feet on this issue. Who knows why – maybe the caution is linked to COVID-19 still impacting the country or fear of other variations of the virus entering it. But I’m not the boss of these things and as usual Vietnam will take its own time to decide these matters.

But at the moment, I’m lying on the sofa softly moaning in contentment with a Larue beer in my hand and just enjoying the air conditioning. As a famous writer once said about relaxing (and in this case, Vietnam), 'If this isn't nice, I don't know what is. "