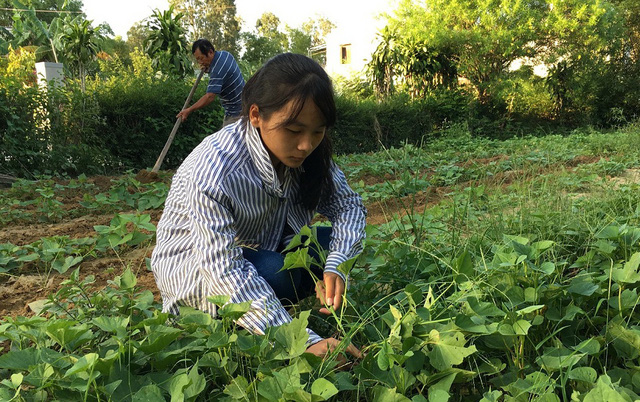 Linh, 15, has been living with her grandparents since she was just a small girl, but their relationship is deeper than most familial bonds.

“She has been calling me mother since she spoke her first words. When she eventually realized our relationship we still continued to address each other the same way,” Loi, Linh’s grandmother, explained.

For Linh, her grandmother and grandfather are the only true parents she has ever known. Her father left when her mother was still pregnant. Her mother remarried three years later but seldom visits Linh.

Though Linh’s grandparents stepped in to raise the girl, their age and financial situation mean life is often difficult for the small family.

Last year, when her grandfather was taken to the hospital to cure a swollen knee, her grandmother was forced to sell the family’s pigs to pay for the operation.

Not long after, her grandmother was diagnosed with a brain tumor.

Her grandfather was able to borrow money to pay for the operation, but the entire ordeal left her grandmother significantly weakened.

Since then, Linh has taken on the entirety of the family’s household chores.

Additional classes are common for high school students in Vietnam.

Despite being ‘additional,’ many consider them an absolute necessity. But for Linh, additional classes are not an option.

“Life has been tough enough for my grandparents because of me. I don’t want extra tuition fees to be another one of their problems. I can study just fine without additional classes,” Linh explained.

“Despite her condition, she has received the title of “Excellent Student” for 8 years straight.

"She has been an exemplary class president as well.

"I believe her education will be even better with the help of the community.”