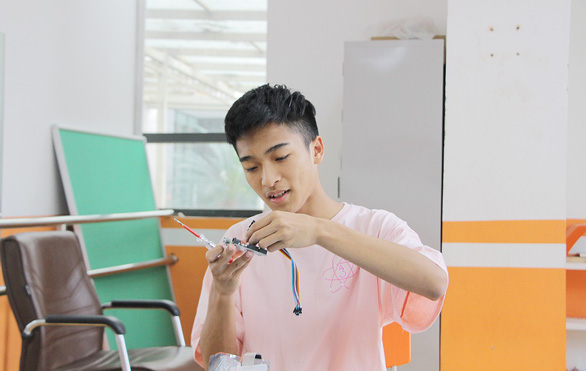 Two Vietnamese high school students have created a robot that distributes medicine to each patient’s room at a hospital, expected to become a “medical assistant” of many infirmaries.

The robot is anticipated to be a solution to the lack of human resources at many Vietnamese hospitals, as it does a time-consuming task that many nurses and medical staff are required to do.

Tong Duy Hai and Tran Phuong Lam, 11th graders at Yen Hoa High School in Hanoi, presented their invention at International Invention, Innovation & Technology Exhibition (ITEX) in Malaysia from May 2 to 4, 2019, where they were one of ten groups to receive a cup and a certificate of merit for the best inventions and for being the youngest inventors.

The creation of the robot was inspired by the lack of medical staff at hospitals as well as understaffed departments with too many patients.

The new medicine-distributing process will include a control room where nurses put pills in each compartment of the robot.

After that, the robot will follow a path designed only for it. On reaching each patient’s room, the robot will signal its arrival so that the patient can go out to take their medicine.

“If the patient does not feel the need for the medicine or was not told to take it, the robot will wait for a certain amount of time before moving on to other rooms,” he added.

The robot is also equipped with other functions in order to limit unwanted incidents, including proximity sensors to detect nearby objects and a camera allowing nurses to always know where the machine is and what it is doing.

“During my studies, I realized I have a better understanding of robots than other areas, which might result from my passion for them,” Hai said.

While his passion was great and he spent a vast amount of time expanding his knowledge of the matter through books, television, and the Internet, he was still faced with many challenges as a student, one of which was “not knowing where to start."

Luckily, both Hai and Lam received great support and help from families and teachers.

“I encourage my son to participate in social activities and support him when he has new ideas, but I also remind him not to neglect his studies,” Pham Thi Ngoc Tram, 44, Hai’s mother, said.

When Hai and Lam were awarded a gold medal at ITEX, they were both taken aback and prided themselves on being Vietnamese.

“We both did not expect to score so high,” Hai said recalling bringing Vietnam’s flag onto the stage as they accepted the award.

Now, Hai and Lam only hope that the investors will develop the robot into a practical product that can be used at Vietnam’s understaffed hospitals.

In addition, the two students are also finishing another robot that they keep as a secret.

This robot is expected to be brought to the U.S. this June to compete in another contest.

'For me, it is a great advantage to live in an environment where I can often speak English with local people or those who speak it fluently and naturally'

Initiated in October 2016, the project covers an area of 50.5 hectares