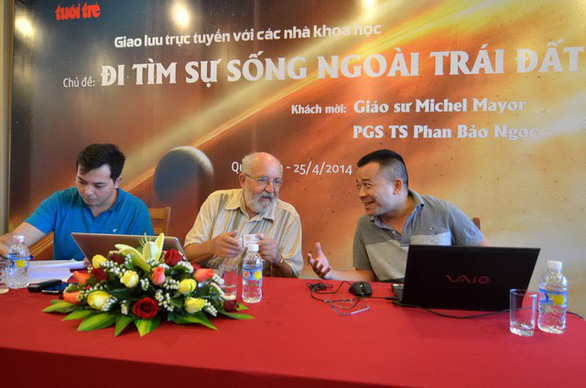 Swiss astrophysicist Michel Mayor, who was awarded the 2019 Nobel Prize in Physics for showing that other stars similar to the Sun also possess planets, has been to Vietnam twice, where he discussed science with the local academia and shared his passion for secrets of the universe with university students.

Dr. Michel Mayor is an astrophysicist and professor emeritus of astronomy at the University of Geneva in Switzerland.

He formally retired in 2007, according to the Planetary Society, but remains active at the Geneva Observatory.

On Tuesday, the Royal Swedish Academy of Sciences announced that this year’s Nobel Prize in Physics would be split three ways between James Peebles, who came up with sweeping ideas to explain how matter in the young universe swirled into galaxies, and Mayor and Didier Queloz, who were the first to discover a planet circling around a distant sun-like star.

They were honored “for contributions to our understanding of the evolution of the universe and Earth's place in the cosmos,” and shared the prize money of more than US$900,000.

The two areas of research, while vastly different in scope and topic, “really, sort of tell us something very essential — existential — about our place in the universe,” Ulf Danielsson, a member of the committee that selected the winners, said during an online broadcast.

Before receiving physics’ highest prestige, Dr. Mayor was in Vietnam on two occasions to promote science in the Southeast Asian country.

In 2014, he chaired an international scientific seminar on exoplanetary science at the International Center of Interdisciplinary Science Education (ICISE) in the south-central city of Quy Nhon.

He also delivered a presentation on “Other Worlds in the Universe?” for students at the University of Science in Ho Chi Minh City, and took part in a special Q&A session dedicated to science with readers of Tuoi Tre (Youth) newspaper on the topic of “Searching for Life Beyond Earth” during the visit.

“Prof. Mayor is a kind and friendly person who loves Vietnam so much,” said ICISE vice-director Tran Thanh Son.

Mayor was the second Nobel laureate to have joined scientific seminars in Quy Nhon after Prof. Barry Barish, who claimed the Nobel Prize in Physics in 2017, said Prof. Tran Thanh Van, who chairs a scientific society that organized the events.

“It shows that [Quy Nhon] has great potential as a rendezvous point for scientists,” Van said.