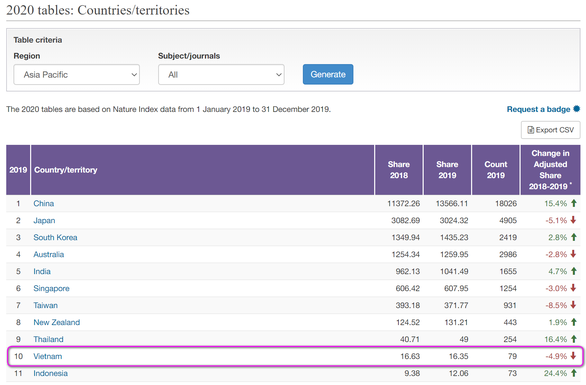 Vietnam has made a list of ten countries in the Asia-Pacific region with the highest number of research articles published in high-quality science journals in 2019.

The list — one among the ‘Nature Index 2020 Annual Tables’ — has been recently released by Nature Research, a division of the international scientific publishing German company Springer Nature.

The Nature Index database captures all affiliation information of primary research articles published in an independently selected group of 82 prestigious science journals, plus links to the abstracts of those articles, and stores whole article counts (count) and fractional article counts (share) for each article.

The latest rankings are based on an institution’s or country/territory’s share of articles, with data collected from January 1 to December 31 of 2019.

Despite having its share dropped 4.9 percent against the same period in 2018, Vietnam has maintained the tenth place in Asia-Pacific, a position it has secured since 2017.

In Southeast Asia, Vietnam stands only behind Singapore and Thailand in the rankings.

Meanwhile, Thailand — with 49 in share and 254 in count — is the only Southeast Asian representative that has made it to the top 10 rising countries/territories, which are ranked by change in adjusted share from 2015 to 2019.

China also leads this list, followed by Norway and the Czech Republic.

China takes the second spot while Germany arrives in third with 4,585 in share and 4,545 in count.

During the tracked period, Vietnam also has 30 institutions ranked in the Nature Index 2020’s institution table.

Phenikaa University appeared in the fifth place with 1.48 in share and three in count although it was the first time the Hanoi-based institution had made the list.