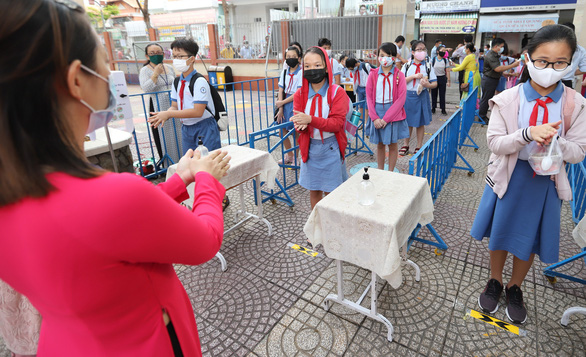 Several localities in Vietnam have changed their plans to allow students to return to schools after the Lunar New Year holiday about a week earlier than the original schedule.

K-12 and college students in the south-central provinces of Binh Thuan and Ninh Thuan and the Mekong Delta province of Dong Thap will go to school and take face-to-face lessons from February 22.

On the same date, ninth and 12th grade students in northern Thai Binh Province will also return to school, while students of other grades will continue online study until further notice.

In the southern province of Ba Ria - Vung Tau, the provincial Department of Education and Training on Friday said that offline classrooms will be organized for students who do not have access to online study from February 22.

Resuming in-person schooling way more earlier, all students in northern Nam Dinh Province and students of vocational schools in Dong Thap have come back to school since February 17.

Meanwhile, authorities in northern Bac Ninh Province and southern Binh Phuoc Province on Friday issued a notification requesting students to not return to school through February 28. Before that, these two provinces had planned to keep school closed until Sunday, February 21.

Elsewhere in such big cities as Hanoi and Ho Chi Minh City, students will study online until the end of this month.

Before the Lunar New Year holiday, which started around the end of January for most of students across Vietnam, students were slated to stay home until at least the end of this month or further notice from educational authorities to help curb the new coronavirus wave that has hit 13 Vietnamese localities since January 27.

Schools have to ensure COVID-19 prevention and control measures after their resumption.

Facing different school-reopening schedules in localities, the Ministry of Education and Training has planned to build corresponding timetables for the current 2020-21 school year based on the experience from the previous school year, according to director of the ministry’s secondary education department Nguyen Xuan Thanh.

"If the outbreak lingers until March and all students still cannot return to school, the department will delay the end of the school year,” said Thanh.

“The schedule for the [2021] national high school graduation exam and the entrance exams at other levels will also have to be adjusted, with the former may be held in separate times as in 2020, if any localities are still unable to suppress the virus outbreak,” he added.

Schooling in Vietnam has experienced interruptions between offline and online modes since January last year when COVID-19 first hit the country.

The latest wave of infections since January 27 has seen a total of 770 locally-transmitted cases logged in 13 provinces and cities.

The national tally stood at 2,362 COVID-19 cases as of Saturday morning, with 1,627 recoveries and 35 deaths, according to the Ministry of Health’s data.