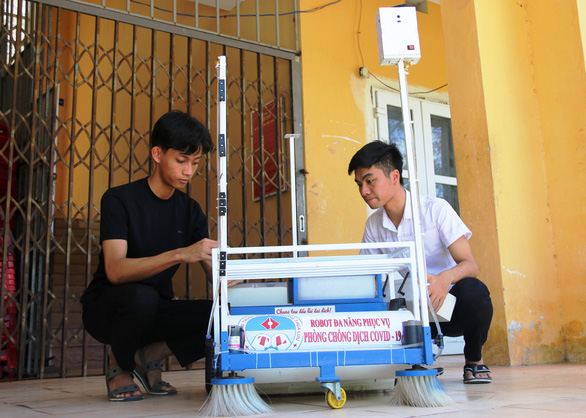 Seeing many frontline health workers burned out during the COVID-19 pandemic in Vietnam, two high school students built a robot that helps combat the virus.

The idea of making a multi-functional robot fighting the COVID-19 pandemic of Hoang Minh Nhat and Truong Viet Bao Chau has come to fruition after three months of hard work.

According to the two students, who are from a high school in Thua Thien-Hue Province, located in central Vietnam, the robot that looks like a shopping cart has a low frame of around 60 centimeters in height and moves on three wheels.

The lower part of the robot can function as an automatic sweeper that uses a 360-degree rotating brush to collect medical wastes.

One dustbin is on the back of the robot and there is a metal box on the top of the dustbin carrying various stuff.

The front surface has two metal pods that are as high as one person’s belly. The two call them the robot’s antennas.

One of them has a device to measure body temperature and the other carries a tool spraying disinfectant along with a UV bulb.

Remotely running the robot via a control box, Nhat demonstrates what the robot can do.

Under his control, the robot moves and brushes the floor cleanly. The robot can move smoothly in the hall on the two-front engine-powered wheels and one behind.

There is a spray container in front of the robot spreading water aerosols. The machine uses an ultraviolet bulb below the sprayer to disinfect the surrounding area. The efficacy of sterilization can be up to 70 percent, said Nhat.

In a test mission intended to prove how the robot can take body temperature remotely, Nhat asked Tuoi Tre (Youth) reporters to come forward and stand in front of it.

When they showed their hands before the robot, its screen displayed 37 degrees Celsius, which is a normal reading.

“The robot has a camera that helps to send images in real time through the control screen panel," explained Chau.

"Doctors can talk directly to their patients via a walkie-talkie.

“The robot uses an RF system, which helps to transmit images from a distance of up to 500 meters."

The two 11th-grade students told Tuoi Tre they had invented the robot, with medical doctors in mind.

They felt extremely impressed to look at the images of doctors who treated COVID-19 patients being exhausted after hours of working in an isolation facility last year.

Nhat and Chau looked for instructions showing how to create a robot that can be controlled remotely on the Internet.

“We hope to seek a solution to address the everyday tasks the doctors who work in quarantine centers have to deal with such as disinfection, taking patients’ body temperature, giving them food and medicine,” recalled Nhat.

After securing the final model of the robot, Nhat and Chau brought it to Chan May General Hospital in Phu Loc District, Thua Thien Hue Province for a trial run.

The two were over the moon after two days of testing for receiving positive feedback from the hospital’s medical staff.

Dr. Hoang Van Tham, former director of the general hospital, complimented the students on the robot.

The machine can save the medical staff from coming into direct contact with the patients when administering medicine, giving food, and running temperature checks, Dr. Tham said.

Each robot would cost around VND10 million (US$440), according to Nhat, but he hopes the cost could be decreased in case of mass production.

"We are mulling over increasing the robot’s automatic capability,” Nhat said.

“In some countries like Japan and South Korea, artificial intelligence has enabled robots to take action according to people’s wishes.

"We are striving to make the robots work on their own without being remotely controlled by anyone."

Thanks to the robot’s distinguished features, Chau and Nhat won the third-place prize in a contest for teenagers in Thua Thien-Hue in 2020, according to teacher Nguyen Hoang Ngoc, principal of their high school.

The two friends’ creative project has been chosen to take part in a national contest this year, Ngoc revealed.

After achieving certain success with the robot helping doctors during the fight against the COVID-19 pandemic, Nhat and Chau would like to make more things that can support frontline medical staff.

“We intend to make special personal protective equipment that can better regulate the body temperature of the wearer,” Chau divulged.